I don’t mind reading stories about hunts or fishing trips to destinations only hedge-fund managers can afford to visit. While... 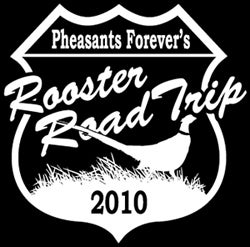 I don’t mind reading stories about hunts or fishing trips to destinations only hedge-fund managers can afford to visit. While they’re entertaining in a way, they simply don’t hold my interest for long. Much like the trips themselves, they’re one-off reads, a bit of Walter Mitty escapism.

But give me a story or a compelling narrative that’s actually within the realm of possibility and I’ll go back to it time and time again, especially if I can identify with some element of it. Plus, who’s not a sucker for a good road trip story with a conservation angle, and this looks like a good one.

-Constant Rooster RoadTrip 2010 updates from the field, the truck and camp at twitter.com/pheasants4ever _

__”This is more than just following along – we aim to give readers the feeling they’re passengers on Rooster Road Trip 2010,” says St.Pierre, Pheasants Forever’s Vice President of Marketing, “Pheasant hunting itself is fun and intoxicating, but a pheasant hunting experience should go well beyond that, and when we hit the road, it will.”

During Rooster RoadTrip 2010, the trio will specifically work for birds on public lands. “North Dakota’s PLOTS program, South Dakota and Kansas’ Walk-In areas, Minnesota’s Wildlife Management Areas and Nebraska’s CRP-MAP program are ideal options for public hunters,” Hauck said, “Habitat and hunting access are top issues for any bird hunter, and these areas give us the ability to profile both.”

Joining the trio on Rooster RoadTrip 2010 will be St.Pierre’s three-year-old German shorthaired pointer, Trammell, and Vavra’s new Labrador pup, Beau. Look for more details on Rooster Road Trip 2010 in the Winter issue of the Pheasants Forever Journal.
_
Since I’m also a public-land hunter, I also have a new pup whose first season is coming up (a setter rather than a lab, but the point holds, so to speak), and since this is something I’ve always wanted to do myself, I’ll be following along. It’s the best of both worlds: a cool escapist adventure, but one that with a bit of planning, is within the reach of most of us.