Teen is First Woman to Bag Bear in Oklahoma

An Oklahoma teenager is the first female to take a black bear in the state of Oklahoma From this story... 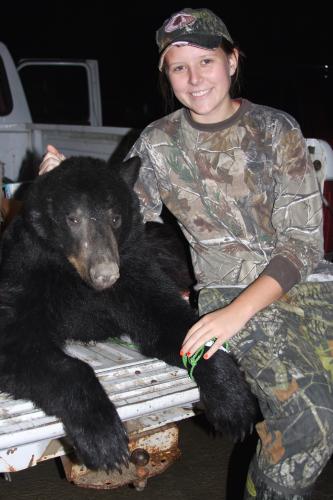 From this story in the Oklahoman:
_Not many teenage girls get their nails done and then go hunting, but Kelsey Weaver is not a typical teenage girl. Thursday, the 17-year-old from Poteau enjoyed having her nails done at a salon. Friday, she became the state’s first female hunter to kill a bear during black bear hunting season. “She can be the prettiest girl in the crowd, or she can grab her camouflage and go to the woods,” said Kelsey’s father, Wesley Weaver, of Poteau. “She’s always been a hunter.”

__Kelsey was one of 31 successful bow hunters Friday on the opening of black bear season this year. This was the second year the state Wildlife Conservation Department allowed black bear hunting in four southeastern Oklahoma counties: Le Flore, Latimer, Pushmataha and McCurtain. The season is closed once 20 bears are killed. During last year’s inaugural black bear season, hunters killed four bears on opening day and only a total of 19 during the monthlong combined archery and muzzleloader season. It was a much different story this year as the season opened and closed on the same day. More bears were frequenting hunters’ baited areas this season because the acorns had not dropped from the trees.

However, most people attribute the increase in hunters’ success this year to the use of crossbows, which were legal for the first time for all bow hunters. “I think crossbows made a major difference,” said Joe Hemphill, southeast wildlife supervisor for the state Wildlife Conservation Department. At least 20 of the 31 bears were taken by hunters using crossbows, he said._