When Hunting Gets Too Dangerous For Your Dog

Last year at about this time David wrote an excellent post about the dangers of late-season ice. I’d like to...

Last year at about this time David wrote an excellent post about the dangers of late-season ice. I’d like to revisit the topic because it touches on an issue and a question of responsibility that – if you hunt ducks with a dog – you will at some point be confronted with: when is it too dangerous for your dog to hunt? 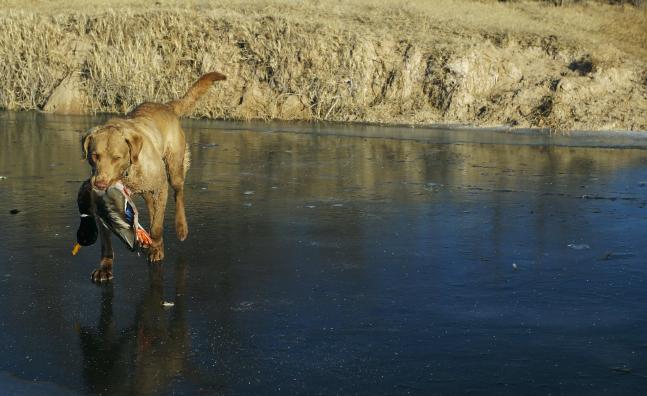 David’s blog highlighted the story of three brothers in California who were out duck hunting when one of them (for reasons not made clear) threw a rock out on the ice. One of the brothers’ dog (a chessie, I believe) went after it and broke through the ice. In trying to reach the dog two of the brothers ended up dead.

Waterfowlers who often hunt in extreme conditions ask a lot of their dogs, and almost without exception, be they labs, chessies, goldens, spaniels, whatever, they obey without hesitation. They don’t question your decision. Personal safety or self-preservation are not issues with which duck dogs bother themselves. You say go, they go. But in doing so, our dogs are quite literally putting their lives in our hands. That’s a huge responsibility.

Once, long ago, I almost lost my first retriever, a lab, in a similar, situation except it wasn’t a rock she went after, but a duck that had fallen well past the shelf of thick ice ringing the large and very deep pond I was jump-hunting. I was young, new to duck hunting and I stupidly assumed my dog could either break through the ice or climb back on top of it with no problem. That stupidity almost cost my dog’s life. After a few tense minutes of thrashing around she finally managed to pull herself back up on the ice, but the experience of standing there helpless, watching as my dog struggled for her life left an indelible impression.

I don’t coddle my dogs. Like most duck hunters I generally hunt without regard to weather or temperature, and I expect my dogs to do the same, sometimes in pretty brutal conditions. But I know their limits – and mine – and since that long-ago experience with my first lab I’ve tried to never put them in a situation they couldn’t get themselves out of. I’m curious to hear from all you duck dog owners. When do you refuse to send your dog?