Vet’s New Wheelchair Will Let Him Fish Anywhere. And I Mean Anywhere

The boys over on the Moldy Chum blog have a recurring post they call “Man Rigs” that showcases all sorts... 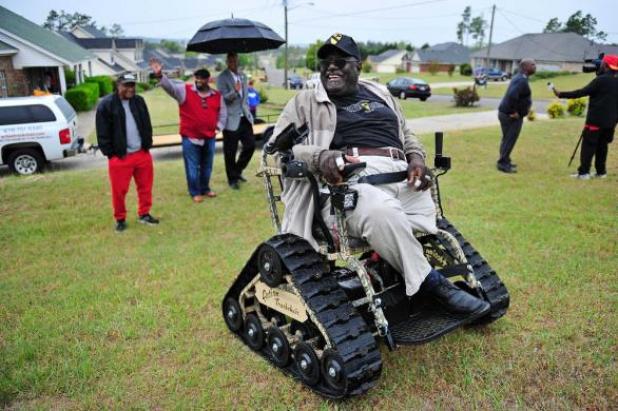 The boys over on the Moldy Chum blog have a recurring post they call “Man Rigs” that showcases all sorts of hardcore off-road vehicles and campers. I’d say this wheelchair qualifies as a definite “Man Rig.” According to this story in the Augusta Chronicle, Vietnam vet Henry Kent, who lost his left leg in 1966, is a life-long fisherman. Though he continued to fish after his injury, a traditional wheelchair really didn’t allow him to get everywhere he wanted to go on the water. One time he even had to be rescued by a UPS driver after his wheels got bogged down in soft ground near the lake. Then Kent learned about the Action Trackchair.

Per the story, the Department of Veterans Affairs refused to pay for the $15K totally bad-a** wheelchair complete with sick tank treads. So Kent got his health benefits advisor to work with the Independence Fund, a “non-profit run by combat veterans that seeks to get tools and therapy to the most severely injured veterans,” and viola…killer new rig that will probably let Kent fish places I couldn’t with two legs. He’s even got this puppy tricked out with custom rod holders and a built in tackle box. From the article:

Kent has a trail of ponds at Fort Gordon in mind, where he couldn’t go before, and where fish have never seen his line. “Now,” he said, reaching down and patting the rain-slicked tread with his hand, “they’re in trouble.”