I’ve been fishing the lily-ringed pond behind me in this photo for as long as I can remember. When my... 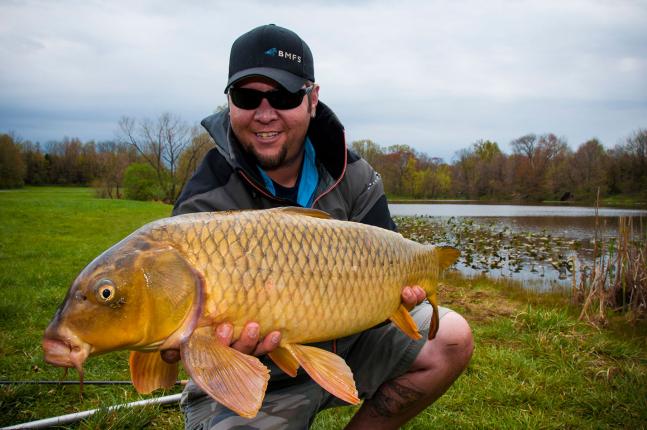 I’ve been fishing the lily-ringed pond behind me in this photo for as long as I can remember. When my dad was a kid it was part of a working farm, and all you had to do to fish it was ask the farmer’s permission, which was always granted (you know, the good old days). According to dad, the bass in there back then were massive. By the time I started fishing it with him and my grandfather, the farm was long shut down and overgrown, but if you were willing to take a long walk, you could still access the pond. From the time I was little right through college, I always caught bass here, but nothing big, and fewer and fewer each year. Eventually, I decided there were just too many better places to fish, so I stopped showing up. It had been easily ten years since I cast a line in the old farm pond.

Fast forward to last Saturday, when my buddy and glorified carp nut Frank Heater texts me and says he found a “new” pond on Google Maps and the carp fishing is good. I laughed to myself when he told me where it was, mostly because I don’t ever remember seeing a carp or signs of carp in that pond in all the years I fished it. Then again, I was not the carp junky I am now, so perhaps I just wasn’t looking for them or paying attention.

We parked in the new lot made by the county, which now owns the land. The dilapidated barns and the old rotting farmhouse have recently been refinished and turned into new facilities for the park rangers. The muddy, thorny trail dad and I walked so many times is coated in fresh gravel, and artsy metal signs even point out the direction of the pond to hikers and dog walkers. The mystique of the place I remember as a kid is long gone, but that afternoon, Frank and I landed a couple really nice carp and dropped a few more. Suddenly the old had been reborn, and it felt kind of good to know that I can walk that trail (as manicured as it may be now) with the same excitement as I did years ago, covered in bug spray, running after my grandfather as he lugged a bucket of shiners and two rods.

Have you ever rediscovered a piece of water?