Helpful Hints For Getting Out Of A Bass Fishing Slump

In every sport there are losing streaks. Just look at last year’s World Champion Boston Red Sox. They recently had... 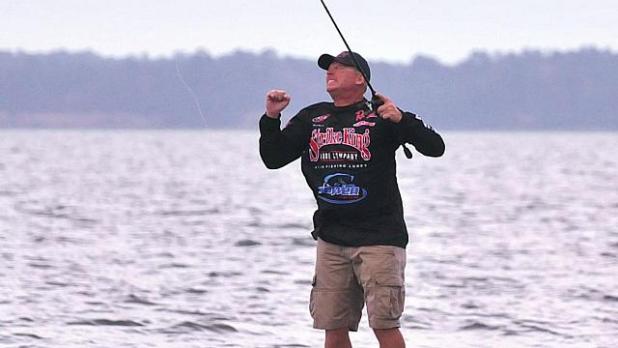 In every sport there are losing streaks. Just look at last year’s World Champion Boston Red Sox. They recently had a record losing streak (which they broke, but I don’t like to talk about that because I’m a Yankees fan). The key to breaking a losing streak in bass fishing, however, is learning to identify better ways to stack the odds in your favor so they don’t get the best of you. So we’re on the same page, I’m not only talking about competitive bass fishing. I’m really talking about Charlie down the street that could do no wrong during his Saturday lake outings, while you’re throwing your hands up because lately you can’t catch a fish in the pet store. If you’re in a slump, or fear you may enter one, here are a few pointers for breaking out.

Be Careful With The “Go Big” Attitude: If I’ve seen this once, I’ve seen it a million times. A guy ties on a big bait just for kicks, nails a monster, and suddenly that full-size trout replica is the only lure he wants to throw. In reality, if you think only using big baits or only targeting oversized bass is a recipe for long term success, you’re wrong. True, you may get that occasional beast, but day in and day out your chances of getting skunked are very high. If you have the mental fortitude to withstand the down time, more power to you, but to maximize the potential of any bass fishing situation, it’s necessary to adapt to the conditions. This could be hourly, daily, or seasonally.

Forget What “They” Are Using: Absorbing dock talk and choosing to only do what “they” say is another recipe for disaster. I believe that at least half of what dock talkers tell other anglers is far from the truth. There’s no substitute for time on the water, and there’s also nothing better than figuring a pattern out yourself. Having your own strategy breeds more and more confidence, and more often than not you will have the self-taught pattern to yourself.

Stick To Shallow Targets: No matter how good you’ve heard the deep bite is, bass are primarily shallow creatures, and there is always a percentage of biting bass that remain in five feet of water or less. Many of the losing streaks I’ve seen anglers get themselves into are due to their insistence on fishing offshore. Bites in deep water often require a more technical approach that relies heavily on electronics, and if you don’t cash in relatively fast, confidence wanes with each unproductive search. When in doubt, hit the shallow spots the bass regularly bite around.

Stick To One Lure Style: Streaks of poor performance with low confidence are often caused by zigging when you should have zagged. Naturally, if fish aren’t hitting a certain lure, you should change it, but some guys change too fast, and then it seems like nothing works. Try taking one broad style of lure that you know well and modify the presentations based on the situation instead of retying with something different every five minutes. Take jigs, for example. Everyone knows bass love them, and jigs ccan be pitched, flipped, swam or dragged and they come in all sizes. If you go out with only a box of various jigs and trailers, chances are you’ll catch some nice fish if you keep changing presentations instead of changing lures.