Does your dog have a soul? And if you answered yes, should you be able to sue an unscrupulous breeder... 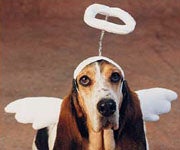 Does your dog have a soul? And if you answered yes, should you be able to sue an unscrupulous breeder for your dog’s pain and suffering caused by genetic defects?

These are just a few of the interesting questions being raised by a lawsuit now making its way through the New York legal system. This lawsuit seeks to reclassify dogs as “living souls” so their breeders can be held accountable for any pain and suffering the dog endures from genetic defects (A big hat tip to Patrick Burns at the always provocative and entertaining Terrierman’s Daily Dose dog blog for the find).

From this story on cbsnews.com:

When Elena Zakharova took home her 2-month-old female Brussels Griffon from the Raising Rover pet store in Manhattan, she was excited about the new addition to her family. But, according to the New York Daily News, just a few months later in July 2011, the dog began whimpering and limping in pain. Now, her owner says despite expensive surgery, she will never run or walk like other dogs. Zakharova is claiming that the pet store sold her a dog with genetic abnormalities that could have been avoided if the pup were not bred from other dogs with disabilities. She is suing the business in a New York small claims court for the pain and suffering of the now year-old dog, which she named Umka.

“Pets must be recognized as living souls, not inanimate property,” said Zakharova’s lawyer Susan Chana Lask to the New York Daily News. But dogs are considered property under New York state law, which means that sellers aren’t liable for their pain and suffering — yet. And, while a “Puppy Lemon Law” allows owners to return dogs that manifest sicknesses within 14 days, Umka didn’t show symptoms until a few months later. If the judge refuses to recognize Umka’s plight, Lask told the Daily News she will argue that the dog bills should be paid under New York’s Uniform Commercial Code, which gives a buyer four years to return a “defective product.”

According to the story, Zakharova has spent $5,000 on medical bills so far, with the prospect of spending much more down the line. She claims she’s not suing for money, but to raise awareness about unhealthy breeders and stop pet stores from selling puppy mill dogs. That’s great and all, but it begs the question of why the hell she didn’t perform some rudimentary due diligence before buying her dog from a pet store?

It bears repeating that one of the most important aspects in selecting a new puppy is, undoubtedly, the issue of health clearances. There have been huge advances over the past few decades in both physical and genetic testing for various issues: for hips and eyes to diseases such as Exercise Induced Collapse (EIC) and degenerative myelopathy. These days, most of us wouldn’t even consider buying gundog pups from sires and dams that don’t have at least OFA and CERF clearances for hips and eyes. Any reputable gundog breeder will offer at least a two-year guarantee on their pups being able to obtain said clearances. (And if they don’t, then don’t merely walk away. Run.)

Your thoughts on the case? Should dogs warrant consideration for “souldom” or does that take us down a slippery legal slope for future dealings with the anti-hunting, anti-working dog animal-rights fringe? And while the world of sporting dogs does have its health and genetic issues, do you think the necessity of having a basic level of functional conformation in a working gundog has helped to spare us at least some of the myriad genetic problems facing many of the faddish, popular non-working dog breeds?