Technology Tells Us How Far We Really Walk On a Hunt

I had an hour or two to kill this past Friday, so I decided that a short afternoon quail hunt... 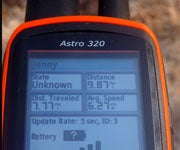 I had an hour or two to kill this past Friday, so I decided that a short afternoon quail hunt at a spot just a few minutes from my house would fill those hours quite nicely. I loaded up my little setter, Jenny, and we were hoofing it through the sagebrush within 20 minutes of pulling out of the garage.

A little while–one small covey of birds and no shots–later, we found ourselves back at the hunting wagon, Rocinante, sucking wind and water. I was, anyway. Jenny was remarkably energetic for having endured such a death march. I figured Jenny had run flat out for approximately 34 miles, and that I had walked at least 20 miles following her. I was also sure that Jenny had, on that wide-open prairie, opened her range up to that of an all-age horseback trial dog. Why, she wasn’t even a dog on some casts, but a small, flowing white dot on the far horizon.

And then I looked at the data. Delusion, meet reality. As you can see from the photograph, Jenny ran a total of 7.7 miles, at a relatively steady and sedate average speed of 6.27 mph. Even on her longest cast, she was never more than a couple hundred yards away. (Disregard that 9.8 miles distance measurement. That’s the distance from my house, where the pic was taken, to where I turned off Jenny’s collar at the hunting spot.) And just how far did Iron Man here walk? Probably less than half of that distance, and certainly under four miles.

But technology, that great and impartial slayer of sacred bromides, is now allowing us to know, precisely, just how badly we tend to estimate both distance and effort. GPS tracking collars like the Garmin Astro and the SportDOG TEK series are opening up a whole new treasure trove of data for gundog owners. They’re really not just for tracking your dog’s whereabouts–you can gauge your dog’s (and your) performance characteristics and hunt details (marking coveys, points, etc.).

When viewed in that vein, GPS tracking collars might start making more sense for those of us who previously thought they were only for big-running pointing dogs and houndsmen.   But back to my original question: Do you think you tend to over or underestimate how far and how quickly you and your dog cover ground? I put the question to Ted Gartner, director of corporate communications for Garmin International, and an avid bird hunter.

“Absolutely,” he replied. “Prior to the introduction of the Astro, I think guys had a tendency to overestimate their dog’s range, sometimes a little, sometimes a lot. I was as guilty as anyone in thinking my dogs ran dozens of miles for every mile I walked, but typically it’s anywhere from 2.5 miles to four miles for every mile you walk. A lot of it depends on the breed, terrain, and individual dog. It was also interesting to see that when I was slowed down by challenging cover, my dogs typically slowed down with me, so the ratios more or less stayed the same.”

Gartner says many trainers, hunters and field trialers use Astros to track a dog’s progress over a given season, using it as a “digital diary” to compare workouts and bird finds from day to day or dog to dog. “GPS has really opened some applications for dogs that we’ve never even imagined,” he says.

So given all the varied ways you can use it, do you see yourself eventually incorporating GPS technology into your hunting in the future, even if you’re not a pointing dog or hound guy? Or do you want to remain pure and unfettered by the yoke of technology?