Make Hot Drinks on Windy Days with the Kelly Kettle

One of life’s great simple pleasures is (for me, anyway) sitting on the truck tailgate on a crisp fall or... 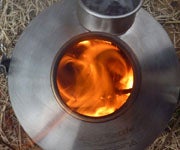 One of life’s great simple pleasures is (for me, anyway) sitting on the truck tailgate on a crisp fall or winter day out in the field, with the dogs at my feet, sipping a hot cup of coffee or tea after a morning’s hunt, idly ruminating on Life, The Universe, and Everything. That’s the bucolic, highly idealized Corey Ford version, anyway. The reality is, I live in Oklahoma (you know, where the wind comes sweeping down the plains) and usually the wind isn’t merely sweeping, it’s howling. Which makes preparing my coveted hot beverage a frustrating proposition.

A Thermos just doesn’t keep water hot enough for my little French press to work effectively, so what I’ve done in the past is take a little single-burner propane stove and a small teakettle with me on bird-hunting trips. This works fine when the wind is down, but the wind is rarely down in my part of the world. The slightest breeze renders my stove, even with the windshield, not very effective.

In addition to wind trouble, space is now at a premium for me. I’ve largely parked my gas-guzzling 4×4 truck and started doing most of my hunting out of my wife’s old Subaru Forester. Having to tote along a stove, a propane cylinder, a kettle and a French press in addition to the dog crates, hunting gear and everything else, makes things a bit cramped. So I started looking around for alternatives last season. And when I’m researching effective, minimalist camping or trekking equipment, the first place I look is on the various bushcraft websites, bulletin boards and forums. That’s how I stumbled across the Kelly Kettle, a European import originally used by Irish fishermen, gamekeepers and herders to quickly boil water for tea and cooking.

It is often called a “volcano” kettle. Why “volcano”? Because that’s basically what it is: A double-walled kettle with a big, open hole in the middle in which you start a small fire. Due to the kettle’s extremely large surface area, the water heats up very quickly. And the fire is protected from the wind, thanks to the kettle walls surrounding it (a biggie for me). In fact, the fire burns hotter as it gets windier because the kettle’s stand acts like a bellow that draws air into the fire chamber.

After a field test, I have to say that it works brilliantly.

I was scheduled to go quail hunting on the day I received my Kelly Kettle, but had to cancel because the weather was so bad. Temps were plunging, the wind was screaming and snow was starting to fall. What better time to try it out, right? So I immediately took it into the backyard, poured some water in it, scrounged a few twigs from the ground, lit the fire and waited. I didn’t have to wait long. In fact, I was, quite frankly, shocked at how quickly this thing boils water with such little fuel.

I dropped a few more twigs down the chimney and had the water boiling within a couple minutes — three at the most. Really boiling. All this during a bitterly cold, strong and gusty wind: The kind that would have been quite impossible to keep my cheap little propane jobber lit, much less heat water.

The next week, I took the Kelly Kettle and my French press to a quail hunt at a local WMA. The weather was sunny, but with that ever-present stiff breeze. I scrounged some tufts of grass and a few dry twigs from the parking area, lit the fire, and within a few minutes, was enjoying a nice cup of coffee out in the field with the dogs instead of choking down a Styrofoam cup of battery acid in some convenience store parking lot. That, however, was the only hunt I got to take my Kelly Kettle on. The season ended a couple days later. I’ve made backyard tea and coffee several times since then, and the Kelly Kettle has performed flawlessly every time on just a handful of twigs.

Are there downsides? A few. One, it’s relatively expensive compared to the fuel stove/tea kettle route. Prices range from $59.95, for the aluminum “Trekker” model that holds 17 ounces of water all the way, to $84.99, for the stainless steel base camp model that holds 50 ounces of water (stainless models are a bit pricier). Will I ultimately save money by not having to buy propane cylinders? We’ll see. Two, the large base camp size is a bit bulky (but still not as bulky as the stove, cylinder and teakettle it replaced). I got the base camp, and I’d probably opt for the medium-sized “Scout” model if I had it to do over again. Finally, the fire base and the inside chamber of the kettle itself will get messy and sooty, and will pretty much stay that way. The kettle comes with its own bag, and I just keep it in the bag when not in use.

Those are, however, very minor nits, especially when compared to how much better the kettle performs in the wind than did my old set-up. The Kelly Kettle will definitely become a permanent part of my kit come next fall. For the particulars, you can check out the Kelly Kettle USA website and videos on YouTube.