What’s the Best Way to Pack a Downsized Hunting Rig?

A while back Phil Bourjaily had a really good blog post about downsizing your hunting rig that generated a ton... 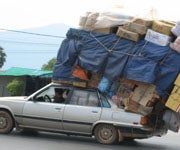 A while back Phil Bourjaily had a really good blog post about downsizing your hunting rig that generated a ton of comments, both pro and con. Now, I haven’t spoken with Phil and can’t say for sure whether he’s going to take the downsizing plunge or not, but for me, the issue’s (mostly) been settled for a while. I inherited my wife’s beloved 2000 Subaru Forester a few years ago when she decided to buy a new car. The plan was to use the Forester as an economical daily driver and save my big, gas-guzzling, full-size four-wheel-drive truck as a dedicated hunting/fishing/wood-hauling rig.

But as I quickly found out, the little all-wheel-drive Forester is a much more handy and capable vehicle than I initially gave it credit for. And over the past couple years I’ve been driving the Subaru as much or more than my truck. It tows my 16-foot skiff without a hitch and has enough cargo room for a dog crate and gear for several days. I’ve driven it on fishing trips to Colorado and numerous bird-hunting trips all up and down the plains states. It’s tough, nimble, economical, not bad off the pavement, dead-reliable and best of all, it’s long, long been paid for. So when I read Phil’s blog, it sealed the deal: I decided this would be the year to commit fully to the “smaller-is-adequate” camp (please, no “that’s what she said” jokes…) and use the Subaru as my main hunting rig.

But all is not peachy in sub-compact land. Waterfowl hunting isn’t really an issue, as I only have one retriever and can easily fit her and all my decoys, waders, gun, etc., in the back when I’m not hunting out of the boat. But bird season presents some problems. For one, I now have two pointing dogs, which means I now need two crates, and twice the food, water and other assorted dog-related gear (e-collars, Astros, tie-out stakes, etc.) that you need on trips. This, of course, has a ripple effect on how much other gear I can haul. So right off the bat, I’m going to need either some type of roof storage or a small trailer either for the dogs or gear. Plus, since I’m now going to be using the Subaru for all my trips, I’m going to have to at least mildly upgrade its off-road capability with more aggressive tires and bolt-ons like skid plates, etc.

So this decision is not without some trade-offs, expense and required adaptation. Whereas before my truck was not so much a vehicle as a rolling emergency preparedness bunker, I’m now forced to make some decisions about what is truly necessary and what is a bit extraneous. There is, I must admit, a pleasing Zen-like minimalist quality to the whole process. Which is good, because you’re probably going to need some Zen to figure out what to do when you’re stranded out in the middle of nowhere without the tools to extract yourself, because they “took up too much space.”

So here’s my question, and it’s directed to all the guys who have already taken the (excuse the expression…) smaller package plunge: How did you adapt to less space, less ground clearance, less overall capability? Did you add exterior cargo space to your vehicle? Did you upgrade its off-road capabilities any? Any downsizing tips you’d care to share? How has it worked out for you so far? My first long-distance bird-hunting road trip is coming up in late September, so I’ve got three months to get my project Subaru ready for the fall. Any tips?