Bestul: A Slow But Steady Rise in Action

Rut Reporter Scott Bestul is a Field & Stream’s Whitetails columnist and writes for the website’s Whitetail365 blog. The Minnesotan... 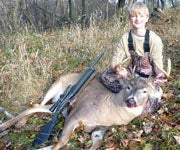 Rut Reporter Scott Bestul is a Field & Stream’s Whitetails columnist and writes for the website’s Whitetail365 blog. The Minnesotan has taken 13 Pope & Young-class whitetails and has hunted, guided for, and studied deer in the north-central region all his life. States covered: IA, IL, IN, MI, MN, MO, WI.

This week included the first of our predicted “best days” and I know of at least one dandy Wisconsin buck that fell on Halloween Day. Unfortunately, I don’t have the full skinny (or permission to use the photo) yet, so hopefully I’ll be able to post that information soon.

A weather front brought much-needed rain to a large portion of the region earlier this week, and in some areas, that system was the kick-start the rut needed. In north Missouri, outfitter Ted Marum reported that prior to the rain, rutting activity had been decidedly ho-hum. The day after the shower, temps dropped, skies lifted and one of his clients saw 12 different bucks on a morning hunt! That’s an awesome morning by any standard, and serves as proof of the power of weather.

Bowhunters in western Illinois are reporting a mixed bag of buck reports. Two friends in that region have noted less-than-stellar buck activity. Scrapes are starting to dry up, indicating that bucks should be widely searching for does. Yet doe groups seem to be feeding without harassment and many fawns are still with their mothers. Still, those same hunters report sightings of mature bucks standing over does in odd places; a sure sign of breeding action. Perhaps those does are among the first estrous candidates on the block and mature bucks are always the best at finding them.

My Wisconsin contacts continue to report good hunting, with bucks ranging widely and chasing does when they encounter them. My experience here in Minnesota (supported by daily text-updates from friends in tree stands) has been less encouraging; though scrape activity seems to be cooling off, daytime buck activity has been disappointing. The good news is a forecasted two-day cold snap, with temps near freezing at night. Hopefully this will goad some chasing activity and get bowhunters excited again. One buddy called this evening to report watching two mature bucks walking calmly behind a doe as she headed to an evening food source. The casual demeanor of this trio is highly unusual for the second of November.

The mercury is slowly dropping as deer activity starts heating up. But that didn’t stop Nathan Wick, a successful young hunter from southeastern Minnesota, from taking this fine 8-point buck during our state’s recently-held youth deer season. Nate made a great 40-yard shot on this beautiful whitetail. The 12-year-old told his father, Bob, that he was “waiting for an 8-point or better” this fall. “He hunted hard and got this buck on the last morning of the season,” Bob told me. Congrats to Nathan!