Early Bow Season Off to a Fast Start

We are weeks away from the rut, but it’s hard to imagine better buck activity than regional hunters are seeing... 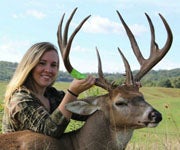 We are weeks away from the rut, but it’s hard to imagine better buck activity than regional hunters are seeing right now. My email inbox has at least one new photo of a monster whitetail from the area each day, and sometimes I have to (like this is ditch-digging!) sort through several. Yesterday’s pic of the day was of this gorgeous buck, supposedly shot in Wisconsin’s famed Buffalo County. I’ve got several great friends from that area, and they report the early season buck kill is probably the highest ever.

How to explain this incredible movement by mature bucks? I think it’s a combination of factors. I believe the drought has impacted many food sources, which is an excellent scenario for bowhunters who take the time to scout; when you find a hot food source, the deer are going to be there, because their options are limited. Also, a big push of cold air hit the region last week, and I’m certain the cooler temps and high pressure has helped put bucks on the feedbag. Finally, there’s been a moon visible in the afternoon sky for an extended period now. Some hunters pooh-pooh the notion of lunar influence on deer activity, but I’m not one of them.

I also witnessed the whitetail equivalent of a feeding frenzy last week. I’ve discussed the early corn harvest as a major x-factor in this space before, but I was lucky enough to see the power of that influence as I hunted in the wake of a combine. The first afternoon after my neighbor combined a large field near my home, my father and I headed to stands situated near the field edge. The deer were hitting the waste grain so quickly, we barely beat them to our spots! I saw multiple does a full two hours before dark that evening, and about an hour before dusk, I spotted a pair of fine bucks. Those mature bucks were coming to the picked cornfield as if they were drugged! Work and family commitments kept me out of the field for the next two days, but when I returned the fourth evening, I was able to arrow one of the very bucks I’d spotted before. Details on that hunt will be in an upcoming report.

Rut Reporter Scott Bestul is a Field & Stream’s Whitetails columnist and writes for the website’s Whitetail365 blog. The Minnesotan has taken 13 Pope & Young-class whitetails and has hunted, guided for, and studied deer in the north-central region all his life. States covered: IA, IL, IN, MI, MN, MO, WI.