Bleech: Bucks on the Move

Northeast Rut Reporter Mike Bleech has been hunting whitetails in his native Pennsylvania and throughout the Northeast for more than... 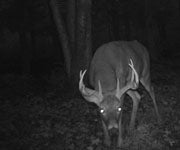 Northeast Rut Reporter Mike Bleech has been hunting whitetails in his native Pennsylvania and throughout the Northeast for more than four decades. A Vietnam veteran and full-time freelance outdoor writer, Bleech has had more than 5000 of his articles published. States covered: ME, NH, VT, MA, RI, CT, NY, NJ, PA OH, MD, DE.

This fall’s rut is not what we anticipated. It’s been great in some places and off-schedule in others. But guess what? This is normal. We can predict as much as we’d like and give averages, but things seldom happen like that in nature. Average is merely a word applied by humans to make things simpler. Just take a look at the weather. Have you ever noticed that temperatures in weather reports are almost always above or below average?

Instead of looking at the grand scheme of things when it comes to the rut, you might find some helpful information by reading the comments in this blog. I have been studying them. And the more comments, the better it is for everyone. Interaction helps to build relationships, and some of the guys who comment regularly seem like we’re old friends now.

For example, take a recent message from fletch66. He’s been trying the bleat can/grunt tube buck calling method. While it’s only paid off with a spike buck so far, that’s actually pretty good. Calling deer you don’t see is not a high-percentage thing, though I feel it is certainly worth trying. However, grunting bucks that I see before calling has been a very high percentage deal. I don’t bother using the bleat can because I’m so close, and I do not want the buck to zero in on my location any more than it might already have.

As for the rut, fletch66 wrote that it is beginning to pick up in southern Maryland. We anticipated this much. The peak of the rut is generally later in the most southerly part of our northeast region. It may seem contradictory, but the same thing happens in the northern most part of the region, northern Maine. According to Don Barnett at No. 9 Lake Outfitters, where I will soon be hunting with a muzzleloader, things are just starting to get hot and heavy. He finally found several scrapes and rubs.

I imagine that the timing for the peak of the rut is affected by the time periods when fawns are born. Throughout most of the region, the best times for fawns to be born is from late May into June. This helps to maximize fawn survival rates because most of the bad weather has passed, and fawns have time to mature before the next winter. Fawns can be born later in the far south because winter arrives later. Plus the winter weather is usually more severe and lingers longer in the north than in the south.

I share your grief, gunit6897. Things did seem to be getting better in my part of the state just as the bow season ended. The rut peak takes place during the first two weeks of November. I am close enough to New York to buy a license there and hunt less than a half-hour from home, but I am hunting bear in Pennsylvania this year. Opening day was the second-highest on record. We are loaded with bears.

Keep the info coming, MASSBowhunter. I lost the contact info for the guy who supplied reports from that area last year. And congratulations on the bucks. You are two ahead of me. I have just about sweated blood trying to get within arrow range of a 10-point I photographed on a trail camera. It’s the buck shown above. Now I will have to wait until the second week of the firearms season. Being unable to get up a tree may have lessened my chances, but thankfully I was able to climb by the end of bow season.

For those of you who are not between seasons, get out there. Keep in mind that being past the peak of the rut does not terribly reduce your chances for success. Bucks are still chasing and searching for does.