Deer Movement Ramps Down, But Not Out 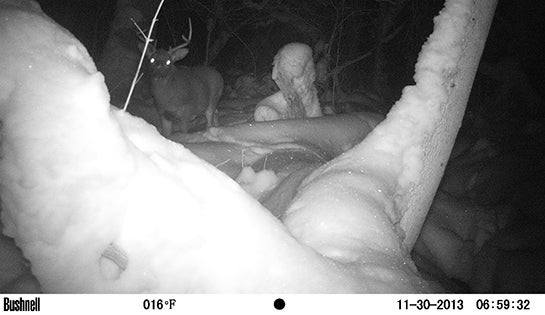 Overall Activity Status: Deer activity has generally slowed considerably. In Erie County and Crawford County, Pennsylvania, Adam Brozewicz at Edinboro Outdoors said that he has been seeing plenty of does moving, but the bigger bucks have disappeared.

Fighting: No fighting has been reported. However, a nice 6-point buck I have seen several times on trail cameras, pictured here, now has one of its long tines broken off, which suggest that it has been in a serious fight.

Rub Making: No fresh rubs have been reported.

Scrape Making: The only fresh scrapes reported were by Westley Marks, owner of Marks Sporting Goods, near Cumberland, Maryland. These he saw in his back yard.

Chasing: Somewhat surprisingly, there have been no reports of bucks chasing does.

Daytime Movement: Daytime deer movement has declined over our region. However, it has not stopped completely. Westley Marks reported some in his Maryland area, as did Adam Brozewicz in the northwest corner of Pennsylvania. He has seen does coming to food plots late in the day, as well as some during midday. Westley Marks has seen some daytime doe activity in Maryland.

Estrous Signs: It appears as though actual breeding has almost ceased. But you can anticipate a secondary rut within the next few weeks, depending on your area.

X Factor: In many states, firearms hunting seasons putting numerous hunters in the woods probably have had a big effect on deer activity. Several contacts, such as John Havlick at Frank’s Gun & Tackle near Gloversville, New York, said the big bucks have disappeared. This has been the case in my own area of northwest Pennsylvania. Here I have not even been catching big bucks moving at night on trail cameras.

If you are hunting when the secondary rut occurs in your area, then you may have some decent buck hunting still to come. Even if you do not notice this second rut, bucks should be receptive to does in heat, so keep using estrous scents.