A giant 550-pound blue marlin – perhaps angry about something they wrote – attacked the press boat at the 51st... 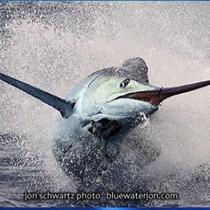 A giant 550-pound blue marlin – perhaps angry about something they wrote – attacked the press boat at the 51st Annual Hawaiian International Billfish Tournament this week.

From this story on KHON2 TV:
Kailua-Kona is once again hosting one the top fishing tournaments in the world with some _of the best anglers in the sport. But the biggest fishing tale so far happened on the press boat when a 550 lb. marlin went berserk and attacked. The 51st annual Hawaiian International Billfish Tournament is shaping up to be one of the most memorable in years with several monster marlins caught including one by the press boat. “I’ve seen some pretty wacky stuff but this still blew my mind,” said photographer Jon Schwartz who was aboard the Chiripa when one of its lines snagged a 550 lb. marlin. “And this giant marlin starts going berserk and it was close the boat.”Schwartz grabbed his camera and started shooting.

“And next thing you know it turns and it comes right at us, and starts *greyhounding* right at us and I’m trying to keep the thing in my lens,” said Schwartz who was focused on getting the shot and not the drama unfolding. “All I know is it got so close that I couldn’t take any pictures. After awhile the fish goes out of the frame because he’s too darn close and I just basically woah what’s going on here. And the next thing I know I hear the fish slam into the boat.”Before it does he captures this amazing image. Seconds later the massive fish dives under the boat. “It was actually never totally hooked it was just wrapped around the bill and the leverage from the pressure was putting it on the weakest part of the shank so that’s how the fish gained its freedom,” said Schwartz.

The boat was not damaged and no one was injured._