Rut Reporter Eric Bruce has been writing about hunting and fishing for newspapers and magazines for 25 years and hunts... 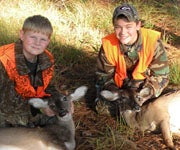 Rut Reporter Eric Bruce has been writing about hunting and fishing for newspapers and magazines for 25 years and hunts deer all over the South, including near his Georgia home. States covered: AR, LA, MS, AL, GA, SC, FL.

Another season has come and gone. I was able to get out and hunt about 70 times this fall. Some were successful, some finished without ever seeing a deer. A few hunts were only an hour long; others included public land hunts, an island hunt and an out-of-state hunt. Here are some of the things I learned along the way.

#1 – Helping someone achieve success can be as enjoyable as experiencing it yourself:
I had the fortune of being with my two sons when they bagged bucks this season. I sat on the ground besides my 13-year-old son, Tucker, when he nailed a handsome six-pointer with his .243. A few weeks later, when he was in a stand by himself, he bagged a spike on the same property. When I approached after the shot, he stood there with his arms held high in jubilation, and that feeling was shared.

I took my hunting buddy and his brother-in-law, who had very limited bowhunting experience, on a morning hunt in late October. An eight-pointer followed a doe by his stand. Though no shot was taken, he was ecstatic from seeing such a nice buck up close, and my buddy thanked me over and over for providing him that encounter.

The state of Georgia hosts an adult/child quota hunt on Ossabaw Island off the coast below Savannah. I went with my son and another father and son duo that had never taken a deer. On the second morning of the hunt, I was with the boy, Robbie Stroup, when he raised his rifle and took his first deer. I’ll never forget the sheer joy on his face when he looked back at me after the shot and exclaimed, “I got him!” The photo above shows my son Tucker (on the left) with Robbie and their Ossabaw Island deer.

After returning from the island hunt, I went bowhunting with my older son on a Sunday morning. After seeing several does and small bucks, a good eight-pointer stepped out between us and walked toward my son. I heard him shoot so I called him. “Did you hit him?” I asked. “Yeah, I saw him go down,” he responded. “Let’s go get him,” I said. We inspected the buck, his biggest so far, after I gave him a bear hug. The buck was in the back of our truck when we went to church later that morning. I would have liked to take that buck myself, but I was much happier and prouder knowing that my son took it. Such is the case when you share a hunt or harvest with a family member or friend.

#2 – There’s something special about hunting a place for the first time:
I was able to secure permission to hunt a new property this season. The land appeared to be thick with deer and not used by other hunters. During my first hunt in that property in early October, I saw about 10 deer and killed a doe and an 8-pointer with my bow. I called my son to see how he was doing and he replied, “I’ve killed two so far!” He took one more to make a total of five bow kills that morning. I returned in early December with a friend and sent an arrow into an eight-pointer right after dawn. I called my friend later in the morning and he replied, “I’ve killed two so far!” That hunt yielded three kills for a total of eight archery kills in two morning hunts. Got to love hunting a new area.

#3 – Know your laws and make sure you have permission:
Hunting in suburban areas, I am sometimes confronted by law enforcement and have to prove my permission. I had several encounters this year, again. Even if everything is in order, it is important to have written permission letters on hand, and to know the property lines and local regulations. On one occasion, I had three campus cops flash the blue lights on their cruisers at my truck when I came out. They clearly did not know the regulations concerning hunting despite me repeating it to them several times. Having my permission letter from the landowner helped me with that situation. Now I leave the permission letter on my truck dashboard when I’m in the woods.

#4 – Calls and scents can work:
I rattled up bucks on four occasions this season, which is highly unusual for me. But it can work given the right conditions, so keep a rattle bag or antlers with you. I also incorporated scent bombs in my stand setups. I clipped three deer scent filled canisters to branches around my stand before climbing up. Bucks would come into my area, and they seemed to hang around longer than usual, which provided excellent shot opportunities.

I also learned that urinating from your stand does not seem to have a detrimental effect. While this topic may be controversial, I personally had bucks around my stand that did not seem alerted by human urine. I also sprinkled a few drops of deer scent afterwards, but there may be some validity to the notion that all urine smells like ammonia after a period of time. I’ve known of some hunters who urinate in scrapes, and bucks still visit them.

As you reflect back on your deer season, I’m sure you also had your share of successes, failures and lessons learned along the way. And while we may grow weary after the long season, I’m sure that you, like me, are already looking forward to next season. I can’t wait for September.