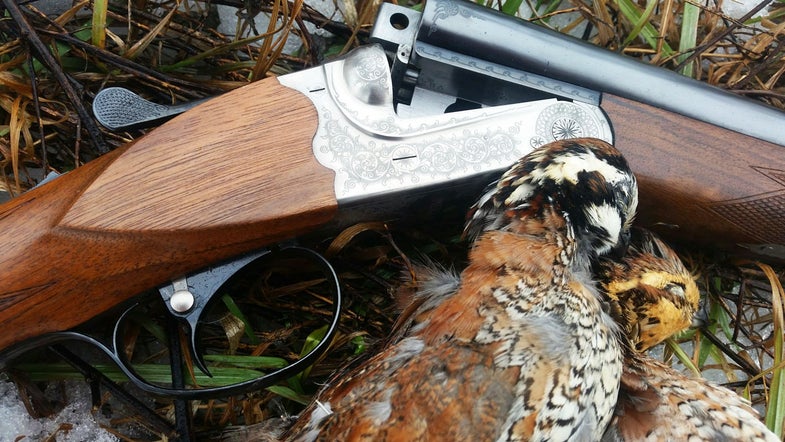 A “budget Merkel” is an oxymoron for sure, but that’s the idea behind the 40E. At $4,500, it’s inexpensive by Merkel standards and designed to be a no-frills hunting gun. The press release even calls it a “working man’s” Merkel which, if accurate, is a solid indicator that I am in the wrong line of work.

If I haven’t already lost you at $4,500, I’ll tell you more about the gun. Merkel is one of Germany’s best-known shotguns, famous for their strength, longevity, German engineering, and precise, Teutonic tolerances. The higher-grade guns boast very deep relief and German-style engraving. I have always found them to be handsome guns in a kind of stocky, angular way. Still made in Suhl, in what was East Germany, they are imported to the U.S. by Steyr Arms. The 40E is Merkel’s first new model in about 10 years, and it follows the basic pattern of a Merkel double, with a Greener crossbolt lockup.

The 40E comes in 12 and 20 gauge, with a choice of straight or pistol grip, and single or double triggers. Some 28s built on the 20-gauge receiver are available, too. The guns have 28-inch barrels, fixed IC/M chokes, and will endure steel shot in smaller sizes (4 or smaller). The 40E has fairly straight-grained walnut and a satin oil finish intended not to show the inevitable scratches and dings that an upland gun acquires. The receiver is finished in silver nitride, with laser scroll engraving.

My biggest quibble with this gun, however, is the engraving. To me, laser engraving looks cheap, and I would just as soon have a plain receiver with no engraving at all than have a laser-engraved gun. I understand that silver nitride is a durable, practical finish, but I’d rather have this gun with a case-colored receiver, or even just plain blued.

Regardless, having somewhat of a thing for Merkels, I leapt at the chance to hunt with this one and carried it throughout the last week of pheasant season. At 6 ½ pounds, it’s not a superlight 20, but it’s nicely balanced. That balance may explain why I was able to take it out of the box and straight to the field, where I shot it twice into a snowbank to be sure it worked, then hardly missed with it through the last hunts of the year. It’s a terrific hunting gun and, as I mentioned, steel-proof, so that your children, grandchildren, and great-grandchildren can shoot it even when and if lead shot is a thing of the past.