How to Handle Two Bass on the Same Lure

The bass are grouping up offshore at this point of the year in most of the country. That means you... 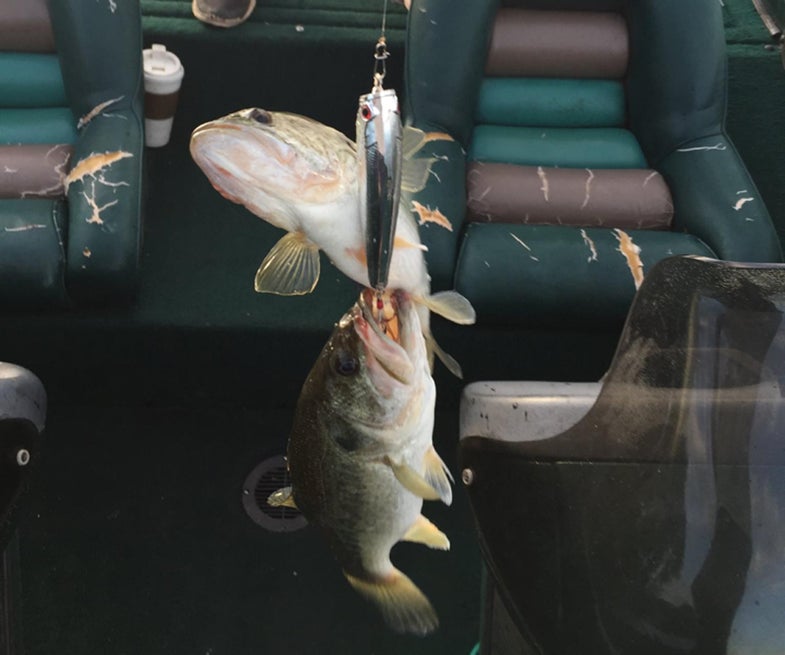 No time for gawking. Here's what to do if you double-up..
SHARE

The bass are grouping up offshore at this point of the year in most of the country. That means you have the potential to find a whole pile of them in a small area, and they’re often aggressive. This is when you get those magical days when four bass compete for your lure at the same time, and also when you have the highest potential for hooking two at once. It doesn’t happen often, but I don’t know many anglers that haven’t been treated to the occasional double up. So what do you do to get them both to the boat? Well, hopes and prayers have a lot to do with it, but so do tackle preparation and a solid fight plan.

If you feel you’re in a situation where there’s a possibility of hooking two bass at once, first it’s a good idea to adjust your hook sizes, hook strength, and even line strength, so long as doing so doesn’t screw up your presentation. For example, if the bass are stacked on a ledge, be sure to bump up the hook size and strength on your big crankbait so that when two big ones slash at the bait, you at least have a shot at landing both. The real test, however, comes when they’re actually hooked. That’s where panic sets in, so you have to know the stats and have a follow-through plan.

The stats go something like this, at least this is the way I see it. You have a high likelihood of having at least one bass fall off, so just expect it. You have a higher likelihood of both bass falling off the longer you play them. Basically, the two bass are pulling in opposite directions, creating bigger and bigger holes in their mouths as they fight. If you let off the gas when reeling them in, they’re gone. And if you let them play around next to the boat because you’re unsure how to handle the situation, they’re gone. So here’s what to do.

If you have a net, keep constant pressure and drag them into the bag as quickly as possible. No messing around telling your buddy, “Look I have two on, isn’t that cool?” Talk later. If you have no net and your tackle can handle it, swing both right into the boat as fast as possible. Some of you may argue with this because you are thinking the fish are too fired up at this point in the fight. I agree they’re green on the energy scale, but statistically I feel you have a better chance of losing them by trying to play them out or land them with your hands leaning over the side of the boat.