Ever drop a rod overboard like the guy in the video? Bet you have. Me? I once had 6 combos... 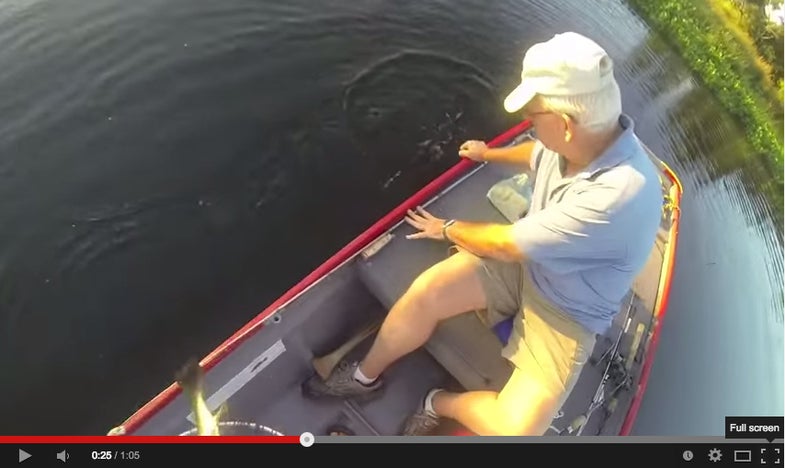 Ever drop a rod overboard like the guy in the video? Bet you have. Me? I once had 6 combos go over the side at the same time. Miraculously, I got them all back. When I was a kid, my dad spent hours probing the bottom of a 20-foot-deep creek hole looking for my expensive smallmouth setup that went down in heavy current. I never thought I’d see that one again, but after dad calculated some algorithm (that’s what he told me he was doing) that projected where the rod drifted before lodging in the bottom, he eventually snagged the tip of my rod with his lure. No matter the scenario, tackle is just too expensive these days to immediately give up on. That’s why I have a red alert plan to quickly fish out rods that hit the drink. It’s not an exact science, but most times all it takes is the right first move coupled with a few minutes of rod fishing to recover outfits that would otherwise be permanently lost to the deep.

If you’re boat is equipped with modern electronics, immediately waypoint the spot as soon as a rod goes down. Depending on where your GPS puck is mounted, this might not give you an exact mark, but it’s worth doing anyway. The more critical action is to cast—or have your fishing partner cast—a heavy lure right on the spot where the rod went down, making sure to keep the bail open or clutch in free spool so the lure stays put, acting as a reference point if the boat moves. With the spot marked, I quickly tie on a snagging rig (a weighted treble) and cast a little past the spot where the rod went over. Then I start making slow drags back to the boat. Over the years I’ve learned that the faster you act, the better the odds of getting the rod back.