Grandma Dorothy would not be happy with me. When I moved into her house, I inherited wall-to-wall shag carpeting, a... 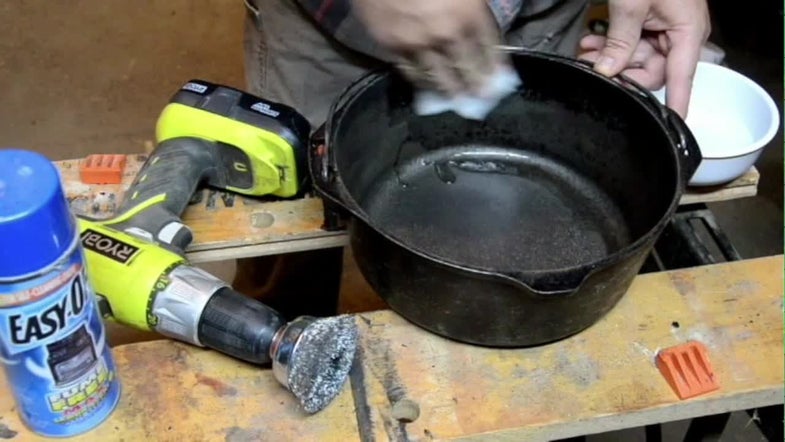 Grandma Dorothy would not be happy with me. When I moved into her house, I inherited wall-to-wall shag carpeting, a post-mod wall clock, and her cast-iron skillet. The first two disappeared rather quickly, but the pan, which was smoother than a baby’s bottom, lasted a few years until one day I decided to use it to fry fish outside. Do you know what flaming oil will do to the finish on a cast-iron skillet? It will strip it faster than the wire brush I use in this video.

So, after destroying 50 year’s worth of cast-iron seasoning on that skillet, I need to rehab it. I also had a Dutch oven that had been neglected. So both of them underwent an extensive spa treatment, and are currently in the re-seasoning process.

Whether you’re hard on your kitchen gear like me, or found some old cast iron at a garage sale, the rehabbing process is fairly straightforward. A lye-based oven cleaner does most of the work. Wear eye protection and some rubber gloves, then coat the cast iron in oven cleaner. Wrap everything up in a plastic garbage bag and let the oven cleaner do its work for 24 hours or so. That should strip most of the old rust and seasoning off. What’s left can be removed with steel wool, or as I show in the video, a wire cup brush mounted on to a drill.

I doubt I’ll ever get Grandma Dorothy’s skillet back to how it was. But my goal is to have in good enough condition that whoever inherits from me will be able to fry an egg in it. I just hope they don’t get distracted while frying fish in it like I did.