How to Make a Jug Line from Duck Decoys

Jug fishing for channel cats is a bit of an oxymoron—that is, it’s lazy excitement. A smart twist to the... 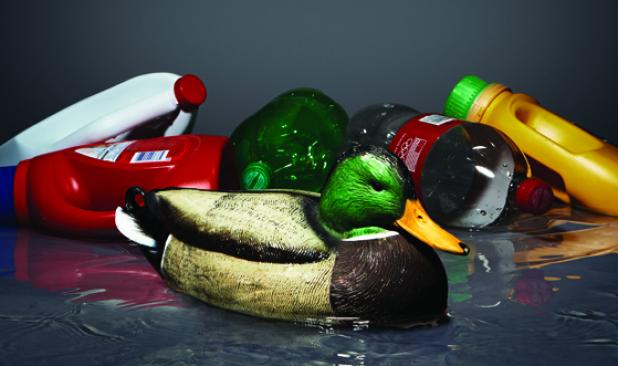 Jug fishing for channel cats is a bit of an oxymoron—that is, it’s lazy excitement. A smart twist to the traditional rig is to substitute a lightweight duck decoy for the Styrofoam float or plastic jug. There’s just something more aesthetically pleasing about a drake mallard than a bulbous bottle with cola emblazoned on the side. Plus, a decoy is more stable than a jug, and rides wind and current with  less errant bobbing. And as you’ll learn, a decoy is just as easy to rig.

1. Choose a light weighted-keel decoy—something around 13 ounces is good. The weighted keel prevents overturn from wind and waves. Duck species doesn’t matter (trust me, the cats don’t care), but drakes are more visible from a distance.

2. Clip a large snap-swivel to the keel. Next, take 30 inches (or longer, depending on water depth) of 20-pound mono and tie one end to a heavy barrel swivel and the other to a 1/0 Daiichi Blood Red baitholder hook. You can add a small rubber-core sinker to the line if you’d like. Clip the barrel swivel to the snap. A 5-inch piece of 1-inch pipe insulation slit lengthwise will fit on the keel to serve as a hook keeper when the rig is not in use.

3. Bait the hook with nightcrawlers, cut shad, chicken liver, or frozen
shrimp—and don’t forget to add a squirt of your favorite flavor of Smelly Jelly. Stinkbaits and tubes or sponges also work well, especially during the warmer summer months.

Photo by Will Styer