Rut Reporter Rich Landers, a native Montanan and life-long hunter, is the outdoors editor for The Spokesman-Review in Spokane. He... 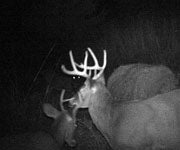 Rut Reporter Rich Landers, a native Montanan and life-long hunter, is the outdoors editor for The Spokesman-Review in Spokane. He has written several books about the western outdoors and has hunted whitetails all his life. States covered: WA, OR, ID, MT, WY, CO.

During my recent week of hunting in central Montana, I watched the leaves fall as snow dusted the mountain top, and I saw the first five-point buck of the season in the process of nosing around does.

The observation was made in the glare of my headlights as I left from a day of hunting on one foothills farm. All the big bucks I saw were before or after shooting hours.

Here’s what other hunters are seeing:

In northern Idaho, Tom Anderson in Sandpoint is starting to see rubs “and some of the bucks that are being shot have a lot of evidence of major rubbing at this point. No scrapes being noticed, yet.”

In western Montana, Jerry Shively (of Flatiron Outfitters) saw whitetails that are beginning to show some neck swelling while guiding elk hunters last week. “We found a few active scrapes and fresh rubs,” he said. “We also watched two very good bucks doing some serious fighting for about 15 minutes. The fight may have lasted longer but we had to leave them to stalk an elk. Does are still not the least bit interested in any of the bucks we observed, but the mule deer are showing signs of being interested and they generally rut a week or so before the white tails in this area.”

That report is confirmed by bowhunter Ron Nail of Kalispell. “We are beginning to see more deer activity that would indicate the rut isn’t too far off. Some chasing by small- to medium-size bucks. So far the big bucks are still laying low, but more rubs are showing up now. I have not observed any scrapes at this point, but my guess is, we will be seeing some within a week or so,” said Nail.

In eastern Washington, Hal Meenach, a farmer and wildlife habitat consultant, reports seeing increased sparring last week, a few half-hearted scrapes and much more activity, as confirmed in the trail cam photo above, captured by bowhunter Chris van Kempen. “With colder temps it takes longer (for the deer) to get the calories needed and we get to see the interactions,” he said.

In central Washington, hunting guide Jason Verbeck got me pumped to start working on my in-state tag. “Whitetails have definitely begun to pre-rut,” he said. “The smaller bucks have been running does for the last week. I have seen a few smaller deer curling their lips as well. The bigger mature bucks are still nocturnal for the most part. They are moving down in elevation a little closer to the does and smaller bucks, but still have not lost their wit just yet. They are about a week out from really getting going.”

“Rattling will work for calling in smaller bucks, but it’s still a tad bit early for a mature buck,” Verbeck concludes. “Though it should start being more effective by the day. Very light rattling, to simulate smaller bucks sparring, has seemed to work best for us.”

The evening of Oct. 25, Verbeck had an encounter similar to the sight I observed on Oct. 28 while ending a hunt 600 miles to the east in Montana. “I saw the first mature buck of the year running a doe,” he reported. “He was in the middle of the road with his nose straight up and his lip curled in my headlights coming down from one of the whitetail properties.”