A Big Buck in Washington’s Backcountry

Newport, Washington’s Bart George has been patterning this monster whitetail for the last two months after it popped up unexpectedly... 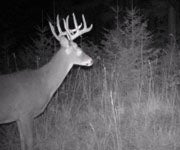 Newport, Washington’s Bart George has been patterning this monster whitetail for the last two months after it popped up unexpectedly on a game camera near George’s elk camp, far into the backcountry of Northeastern Washington’s Pend Oreille County. The buck, whose rack and body are huge by local standards but not by George’s, shares real estate with a trophy bull elk that eluded George this archery season. George lives in the whitetail woods and monitors a large network of cameras for his own hunting and for his day job as a wildlife biologist for the Kalispel Tribe of Indians, one of a few reasons I’m excited to share his reports this fall.

Despite this whitetail’s proximity to a wolfpack of at least 10 animals, many cougars, black bears and occasional grizzlies, big public-land whitetails like this often escape harvest by living far off the beaten path, beyond the limits of most hunters. For a sportsman like George, however, the challenge presented by this backcountry buck is just what he looks for.

A big, corn-fed former collegiate wrestler with a penchant for shooting big animals and for achieving beyond his years, 31-year-old George is an Iowa transplant who cut his teeth in the fields and hardwoods of the Hawkeye State. Today, in the frontroom of his rural ranch house in the woods, his western trophies take center stage: a trophy backcountry mule deer taken in the winter with a muzzleloader, a big bull elk harvested with a bow, and a 350-lb multi-color black bear shot with a rifle. But it’s the backroom trophies that are most notable.

Hunting 60 days a season during college while simultaneously wrestling and running a small business, George took a 188-inch whitetail with a shotgun and a 176-inch whitetail with a bow. Both look gaudy on a Washington wall. George was a leading proponent of new four-point rule being piloted in select game management units in Northeastern Washington. He watches whitetails closely and has high hopes for strengthening of the herd, but he has declined to shoot a whitetail since coming to Washington several years ago, instead focusing his whitetail knowledge over the last several years in many successful efforts to help friends harvest bucks.

For the first time, just today on the phone, I heard George get excited about chasing Washington whitetails. He’ll give this buck a go this early October during his wife’s muzzleloader elk season, several miles into the backcountry of Northeast Washington’s rugged Selkirk Mountains in Pend Oreille County. The mountains of Northeast Washington harbor the state’s biggest bucks, the king of which was harvested in neighboring Stevens County in 1992, a 200-inch freak. This buck wouldn’t stretch the tape nearly that far, but he’d make the books. More likely, though, he’ll die of old age or will end up in the stomachs of hungry predators, maybe George’s.

He won’t have the advantage of the rut during early October, but even here at the end of September, cold nights have descended in Northeast Washington, yellowing leaves and contributing to bloodstains on blacktop. Whitetails littered the roads in southern Pend Oreille and Stevens Counties this weekend, an indicator that deer are becoming more active and that whitetail populations are indeed rebounding as state game managers indicate.

The river bottoms, farmlands, and woods of the West are home to some big-bodied trophy whitetails, and Jeff Holmes knows them well. A university faculty member and a lifelong whitetail hunter, Holmes is lead contributing writer for Northwest Sportsman Magazine and writes for many other outdoor publications. States covered: WA, OR, ID, MT, WY, CO.