Fishermen tend to categorize fish as smart or dumb according to how easy those fish are to catch. Freshly stocked... 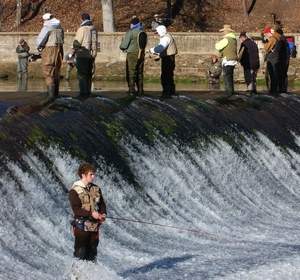 Fishermen tend to categorize fish as smart or dumb according to how easy those fish are to catch. Freshly stocked hatchery trout are usually seen as dumb. But I think they’re not so much dumb as ignorant, having learned about nothing but hatchery food pellets.

An artfully tied nymph dead-drifted in front of a stocker’s nose might well be ignored because the fish has no idea it represents natural food. Something that’s bright, flashy, and wiggly, on the other hand, can trigger the fish’s natural instinct to attack. If I happen to be fishing a stocked trout stream early in the season, I’ll often use a bright marabou streamer fly or a flashy spinner rather than something more imitative for that reason.

Those stocked trout that survive the onslaught of opening-day weekend, on the other hand, learn very quickly and over a few weeks become much harder to catch. In that time, they’ve figured out what various natural foods look like and often respond better to an angler’s careful imitations.

I wonder, though, how smart trout really get. Does a brown trout in hard-fished water actually learn to spell “Mepps,” for example? Sometimes it seems that way. I’ve watched trout that I knew were stocked in April refuse the finest of dry flies in June. Do trout learn to hunker down when they hear the clunking oars of a driftboat? And does the drone of a slow-trolling outboard motor give the fish lockjaw? Maybe there’s no easy answer….