Cermele: It Started With Lure #1

The other day while getting gear together for a smallmouth trip, I was digging through boxes looking for a few... 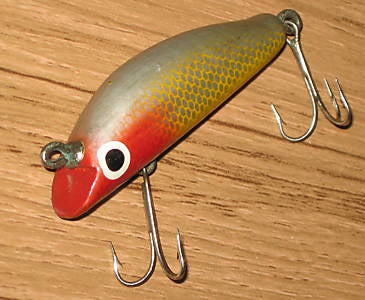 The other day while getting gear together for a smallmouth trip, I was digging through boxes looking for a few specific baits when it dawned on me that I have more lures than I know what to do with. This is no doubt a problem shared by many fishermen. Part of the issue is that I’ll go buy a couple baits for a specific outing, not target that species for a while, then forget what I have and go buy a couple new lures next time around.

But what I also got to thinking about was how this insane collection started somewhere. For me it got rolling with a Boone Spinana, pictured above, though that’s not my lure. Mine was yellow with red and black dots and it has disappeared into the ether. I don’t know who gave it to me, but I know it was the first artificial lure in my pint-sized tackle box, which at age five (I’m guessing) contained not much more than a pack of hooks and two bobbers.

Tell you the truth, I don’t recall fishing with it much or catching anything on it. Lures are boring when you’re little; worms meant action. Boone still makes Spinanas, but you won’t soon see Mike Iaconelli winning a tourney with one. If I hadn’t looked them up on the Boone site, I would have assumed they were long out of production. Perhaps I’ll come across this bait one day buried in the rubble of my gear, and if so, I’ll give it a rightful place on the shelf.

So do you remember the first lure you ever owned? Even better, you still got it?