Merwin: The Tale of the Double-Taker

I was fishing Lake El Salto out of Anglers Inn in southern Mexico last week (about which more later) for... 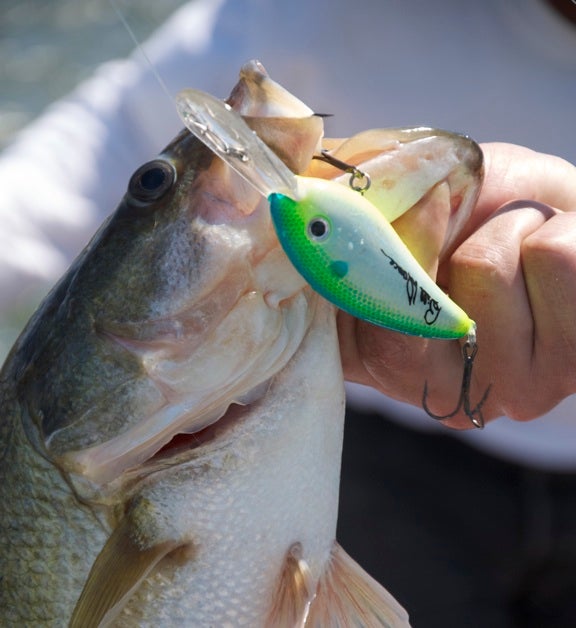 I was fishing Lake El Salto out of Anglers Inn in southern Mexico last week (about which more later) for largemouth bass when I hooked and lost a lunker that weighed exactly 9.2 pounds. Yeah, I know. If I lost the fish, how do I know what it weighed? Therein lies the tale.

On that particular afternoon, my fishing partner Ron Franklin and I found a bunch of big bass hanging in water 15-20 feet deep. The hot lure was the Bomber Fat Free Shad deep-diving crankbait in the photo. The drill was to make a long cast and then crank furiously for a few seconds to get the lure down to running depth. At that point, the retrieve was slowed way down–just barely fast enough the keep the lure deep while at the same time slow enough to entice a strike. So I hooked and then lost a big fish near the boat when the line broke. My fault. The line had become frayed near the lure and I should have checked and re-tied before continuing to cast. Over the years, I’ve lost any number of good fish for the same reason. You’d think I’d have learned by now.

Anyway, about 10 minutes later Ron hooked another big one on the same kind of crankbait. After a healthy tussle, the fish came to the net. At that point Ron was laughing, exclaiming, and pointing all at once. There in the net was a large bass with my “lost” crankbait stuck on one side of its mouth and Ron’s identical lure stuck in the other side. The fish pulled 9.2 pounds on a digital scale before being released.

No, I don’t have a photo of this. I wish I did, but it was our first afternoon on the lake and I hadn’t even unpacked my camera yet. I did get to find out how big the “one that got away” happened to be, though, with a fish story that just doesn’t happen every day.