Last April, I asked readers here for some tips on big bass baits for a trip to a far-southern lake... 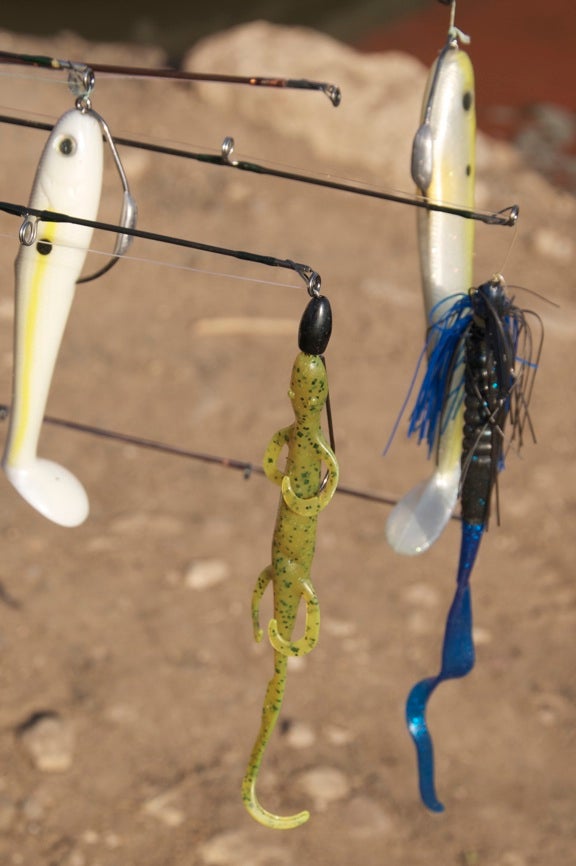 Last April, I asked readers here for some tips on big bass baits for a trip to a far-southern lake famous for big fish. Some of you guys were right on the money with your suggestions: big swimbaits, 10-inch worms, and so on. Those are the lures that took numerous 5- and 6-pounders and very good numbers of 7- to 9-pound fish.

I snapped this photo of lures hanging off rod tips when one of the guide’s boats came in for lunch. You’re seeing a pair of Yum’s new Money Minnows, which are 5-inch hollow, soft-plastic swimbaits rigged on 6/0 swimbait hooks that also carry a one-eighth-ounce weight on the bottom of the hook shank. Martine, one of the veteran guides with whom I fished, called that his number one big-bass producer. And that’s just how thing’s worked out at Lake El Salto in southern Mexico.

Also effective were Berkley PowerBait 10-inch worms, especially in black with a blue tail, Texas-rigged with a three-eighths-ounce worm weight or fished on a jig head as shown. I did just as well, though, with the 10-inch Strike King Anaconda worm, a lure also suggested by several readers. The green-pumpkin Zoom Lizard in the largest size was also a hot bait.

All of those lures will also translate into big bass when fishing just about anywhere. Big baits for big fish really is a time-honored equation….