This is one of my favorite stories, which if nothing else will prove what a nasty old guy I really... 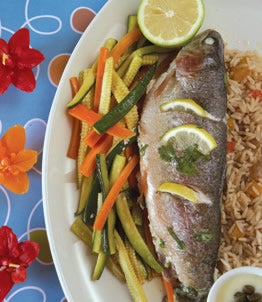 This is one of my favorite stories, which if nothing else will prove what a nasty old guy I really am. My old pal Fred wanted a flyfishing lesson, so I took him down to a meadow stretch of the local trout river on a sunny spring afternoon. We sat on the bank overlooking a productive pool.

I explained that in an hour or so some Hendrickson mayflies would be hatching, showed him where to cast, and told him to sit still without moving around so as not to scare the fish. I went off to fish a couple of hundred yards downstream. The hatch started in due time, and there were some nice brown trout rising near a log jam.

I caught one on a dry and kept it, thinking Fred would probably like a fish to take home. I caught a second and kept it, too, so Fred’s wife could have one to eat also. After catching a third trout, I decided enough was enough and released it, as I do more often than not. I walked back up river toting the two trout in a canvas sack. I found Fred still sitting and smiling in the sun. Yes, he had seen some fish, but his line got tangled so he just sat there to watch.

As we sat together, another angler came walking up the riverbank, dressed to the nines and looking as if he had just stepped off the cover of an Orvis catalog. He asked if we had caught any, and I said yes, that I had kept a couple. He wanted to see them, so I dumped a brace of nice browns from my sack on to the grass.

This really set the guy off. He started giving me a loud lecture about catch-and-release.

When he paused for breath, I looked him in the eye and said, without expression, “Nah. I like to twist their necks.”

The guy went ballistic. Red-faced and swearing at me, he went stomping off across the meadow. Fred looked at me. “You’re really bad,” he said. “You knew that would happen.”

“Yeah, I did,” I said. “Serves him right for preaching.” And I explained to Fred about catch-and-release and how I’ve released almost all my fish for decades while once in a while keeping one or two for dinner. Which is perfectly okay.

Fred took the two trout home. He told me later how great they were. Mrs. Fred liked them, too.