I’ve always felt that the main attraction with fly fishing is not so much about the fish as it is... 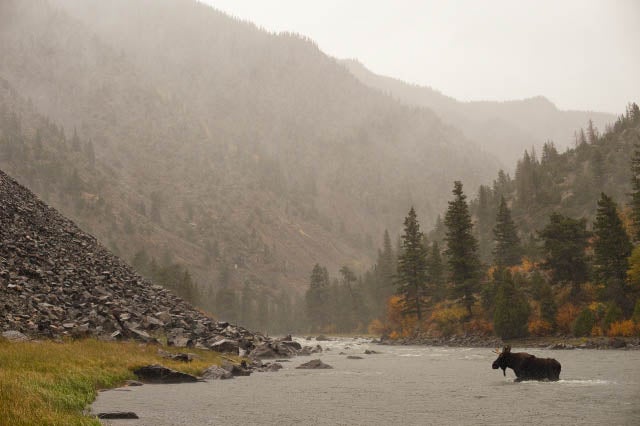 I’ve always felt that the main attraction with fly fishing is not so much about the fish as it is about the places, people, and wildlife you encounter along the way.

Of course, some encounters are better than others… some are downright dicey.

Take, for instance, our Fly Talk escapade with Joe Cermele last week. We wanted nothing more than to show our guest the “whole Colorado fishing deal.” Which we did… floating the rapids, pulling streamers, camping in the cold wind, dodging fall storms (sometimes), throwing dries at rising rainbows, and more… You can expect an exciting edition of “Hookshots” video coming to fieldandstream.com in the future.

For me, the highlight was an unscripted encounter with a young bull moose. We’d hiked up the river and scaled small cliffs to find some killer pocket water on the Colorado River in Gore Canyon. Just as we made our first casts, the wind started blowing, the rain started pelting, and down the opposite bank walks Bullwinkle.

Now… I don’t come face to face with bull moose very often. But I do know that the guides in Alaska, B.C., the northern Rockies, and up in Maine are often more concerned with moose than they are bears. Apparently, a moose can ruin your whole day.

Tim is casting upstream. Joe is sitting on a rock. And I’m about to cast when the moose stations himself directly across the river, about 35 yards away, looks straight at me, and takes a big sniff. Then he steps out into the rapids… decides that’s not a good place to cross… finds another spot… steps back in the river…

That’s all I had to see. “Joe, I’m headed downstream,” I said. And I was gone. Looking over my shoulder, I saw Tim had traded his fly rod for his camera and was taking photos. Bullwinkle was apparently none too pleased, and he found his crossing spot.

Next thing I heard a few minutes later was the clatter of crashing rocks, as Tim was sprinting past Joe over the scree, shouting, “Go, go, go!”

Fortunately, the moose figured he had better things to chase (probably cow moose), and broke off his pursuit.

Snakes I hate. But you can avoid problems if you don’t step on them. The thing with a moose is figuring out how not to have them step on you.

Anyone else had any close moose calls?