For most of us, shed-hunting season is long over. For Bill Monahan (pictured) and his family, hard-working Minnesota dairy farmers,... 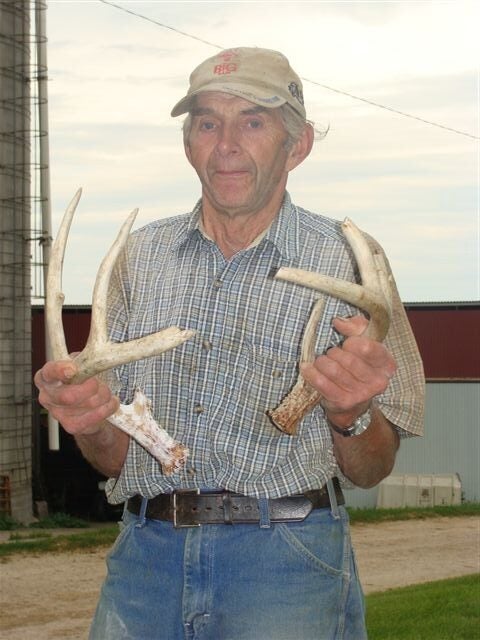 For most of us, shed-hunting season is long over. For Bill Monahan (pictured) and his family, hard-working Minnesota dairy farmers, it’s just getting interesting. Bill’s wife Lucy called a mutual friend to report a shed-hunting story that’s pretty unique. Apparently, Bill was unloading hay bales from their second hay crop this week when he noticed a tine sticking from one of the bales. Bill dug the shed from the bale.

The discovery of the hay bale shed must have got their son, Matt, to thinking. Matt had found a mangled antler base in a bale from the same field….harvested during the first crop, taken several weeks earlier! The severed base appeared to be a match to the complete antler that Bill had found. So Bill returned to the field–now nicely mowed–and found the remnant of the first antler. The Monahans now have a perfectly matched set.

Anyone who’s spent time shed hunting recognizes the heady feeling of finding a matched set, and that there is always an element of luck involved. But I have never heard of a shed-hunting karma quite as eerie as the Monahan’s. How about you? Any totally wacky shed-hunting stories you’d care to share?