This is my 100th Buck Tracker post. Among the few things I’ve learned about blogging is that most bloggers hit... 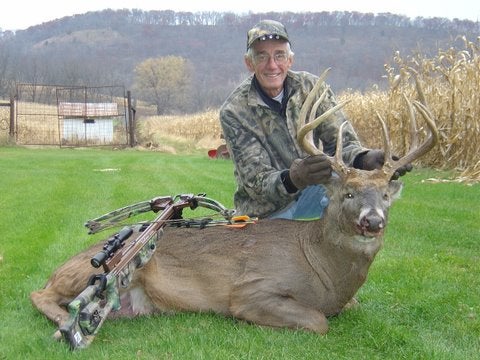 This is my 100th Buck Tracker post. Among the few things I’ve learned about blogging is that most bloggers hit a hundred posts in a few months. Then there’s me.

Still, I was intending to celebrate the milestone with some of my favorite eye-candy deer pictures. But I’ve got something heavier on my mind today. Those who do me the honor of regularly visiting this spot will remember my friend Bob Briggs, a passionate deer hunter who’d been battling pancreatic cancer. I attended Bob’s funeral this weekend, and I thought it appropriate to honor my friend in this space.

Bob was one heck of a deer hunter. But he was also much more than that; a respected dentist, experienced pilot, expert flyfisherman and wingshot, honored land steward, fine dog trainer, exquisite wild game chef, world traveler…shoot, I can’t even do him justice in this space. The man was simply good at anything he tried, largely because he threw himself at whatever he tackled.

All those skills are nice, but the main thing about Bob was this; he was just a fine human being, a devout family man, and a friend to all who knew him. Bob let me hunt his 500-acre farm every year during the late archery season, and I considered that privilege one of my most cherished. Not because of the farm’s terrific habitat, abundant food plots, and thriving deer herd…but because that annual invite was a gesture of friendship from a man I truly respected and genuinely loved.

Less than three months ago, Bob’s son Steve and I dragged out the last buck that Bob would ever kill on his farm. It was a fine whitetail, among the largest ever shot on the property. Bob was waiting for us when we returned and we spent many minutes talking about his deer and the hunt. My friend, 67 years old and rail-thin from battling cancer, had trudged up a steep timbered hill, sat most of the day, shot a tremendous buck, then made the long hike back to camp.

I’ve thought a lot about that day lately, and at times I’ve wondered; did Bob pour himself into that deer hunt, knowing it might be his last? But I know the answer. My friend treated every outing with the same zeal, the same drive, whether he was jigging crappies, flying a plane, hunting morels, or waiting for a buck. We should all hunt so well and with such passion.

So long, my friend.