We drove up the lone dirt road that shoots like a cherry stem into the heart of the many thousands... 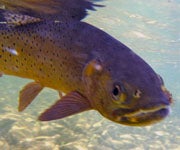 We drove up the lone dirt road that shoots like a cherry stem into the heart of the many thousands of roadless acres in the Flat Tops Wilderness area. At the center of this region is Trappers Lake, one of the largest natural mountain lakes in the state (at five miles around, it is indeed small by natural lake standards in many states, but large in the mountain pothole context of high alpine waters). Trappers Lake is home to a resident population of Colorado River cutthroat trout, as are the myriad brooks and streams in this section of the high country.

The key issue in maintaining the pristine appeal in this section of one of the country’s Best Wild Places is maintaining a roadless policy, according to Aaron Kindle, Trout Unlimited’s field coordinator for Colorado. Off-highway vehicle use on designated trails and roads is something that Trout Unlimited actually supports and encourages. However, unlimited OHV use can threaten fragile spawning creeks that the rare populations of native cutthroat trout depend upon for spawning. Roadless areas also provide refuge and calving habitat for the massive elk populations that live in the region.

Traveling to Trappers Lake, one cannot help but notice the massive scars of burned trees all around. In 2003, the Big Fish Fire consumed over 23,000 acres of forest, and even claimed the historic Trappers Lake Lodge (which has since been rebuilt). I asked Kindle, pointedly, what damage OHVs could do in a roadless area that wasn’t already caused by the likes of a devastating wildfire.

“Ecosystems have evolved for fires, and in fact lodgepole pines need fires to germinate,” Kindle said. To further his claim, he pointed to the crimson patches of fireweed growing along the banks of Trappers Lake, as well as the green layers of undergrowth–“elk chow,” in other words–lining the hillsides and folds in the glacial moraine falling away from the lake.

We caught a number of native cutthroat trout by wading gingerly off the shoreline, watching for subtle rings on the early morning (near-windless) water surface and then throwing small caddis dry flies at the targets. Some of the fish were 20 inches long. But the most special fishing experience of the day was a hike up the South Fork of the White–where, as the sun started to set, I spotted a riser beneath a rocky outcropping and I dropped a small mayfly pattern in front of it. The fish made one false rise and then swirled back to inhale the fly.

It was a 19-inch Colorado River Cutthroat.

Caught on a dry fly.

I decided that was without a doubt, my best fish of any species that I had caught anywhere this summer. This was partly because of how big it was; partly because it was a native cutthroat, but mostly because of where it lived. And it occurred to me that catching wild, native trout in a pristine wilderness stream–one we all own–is an experience we should endeavor to safeguard for future anglers, no matter what.