While the hunter remains nameless and details are sketchy at this point, this much seems to be true: the buck... 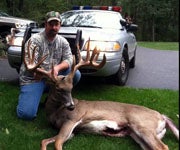 While the hunter remains nameless and details are sketchy at this point, this much seems to be true: the buck in this picture will likely shatter the Connecticut state record for a bow-killed non-typical whitetail. This massive buck was shot near Haddam, Conn. last week. It was allegedly green-scored by a taxidermist/measurer who came up with a net score of 226-7/8 inches.

The current archery state record for non-typical whitetails is a buck scoring 201-7/8 inches that was shot in 2000 by Henry M. Konow Jr.

Connecticut is not a state that produces a lot of trophy bucks; there are only four non-typical entries and 12 typicals listed in the Boone & Crockett books. We’ll be tracking this story and providing more details about this tremendous whitetail as they become available. In the meantime, congrats to the hunter!