The tail end of the primary rut has some often formidable hurdles: The majority of does have been bred. Young, … Continued 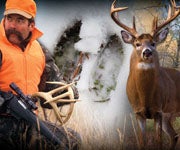 The tail end of the primary rut has some often formidable hurdles: The majority of does have been bred. Young, and even subdominant, bucks are simply worn out and not chasing anymore. Overall, rut-related deer movement generally declines after the peak of the breeding season.

But I love hunting this period because the biggest bucks in the herd–those mature, experienced breeders–aren’t content to let the show end so easily. There are a handful of does left to chase down and breed, and they’re the only ones with the right stuff to get it done. Your chances of seeing a buck today aren’t as high as they were a week ago…but the buck you do see will probably be a fine one. If you’re a quality-over-quantity type, this is your day.

Other factors combine to make this Wednesday stand out. First, the moon will rise early this morning and stay visible for much of the day. Second, though the firearms season is now open in many states, bucks will have had a chance to wind down from the goading of weekend warriors. Finally, it’s late in November, and while cold weather is by no means guaranteed, we stand a much better chance of experiencing a late-season cold front (or snowfall) that can put whitetails on their feet.

Stand hunters should follow a two-phase plan today. But instead of sitting in thick cover early in the morning, as you did earlier in the rut, you’ll want to set up with a view that encompasses a lot of ground so you can see the big one when he moves through, searching for a late hot doe. Get on a remote fenceline running through CRP, a bluff overlooking a broad creekbottom in prairie country, or the edge of a young clear-cut in big timber. These are the areas bucks will use as their travel routes, and you want to spot them as they cover ground. By midafternoon, make a hasty move closer to a food source. The cool weather will have does needing feed, and the bucks will nose around, hoping to catch any lingering estrous scent.

Hunters in snow country who want to follow a track should seek out similar cover. If you cut the track of a big deer, get on his trail immediately. Still-hunters should cheat toward open cover, hoping to glimpse a good buck on his feet. Move slower than normal, stopping to glass likely cover or set up every so often and rattle. Remember, that mature buck is likely traveling solo and looking hard for other deer. The clacking of antlers will be music to his ears.