The deer season has been closed here in Minnesota for about a month, but I can’t keep from snooping around... 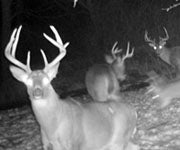 The deer season has been closed here in Minnesota for about a month, but I can’t keep from snooping around the timber, even if it’s just for a 10-minute walk. It was on such a jaunt last week that I discovered the unmistakable sign of a buck working some scrapes. So I ran back to the house, grabbed a trail camera and mounted it so it overlooked the pawing in the snow.

I decided to pull the SD card from the camera yesterday afternoon. And when I walked back to the scrape, I was shocked by the amount of deer sign there. The signs indicated only a deer or two working the scrape when I initially set up the camera. It looked like a cow-yard yesterday! After pulling the out the card, I hustled home and fired up the computer. In five days, I captured at least eight different bucks displaying all kinds of behavior: scraping, working licking branches, rub-urinating and sparring.

I run trail cameras quite a bit in the summer and during the season, but I can honestly say that this was the best set of shots I have had all year, and the only time I’ve had five bucks in one photo. Are any of you still running cameras, and does the amount of activity I lucked into match what you’re seeing in your area?