Nose Jammer Put To The Test, Part I

If you’ve been following along, you know that I’ve taken a few lighthearted pot shots at Nose Jammer, a spectacularly... 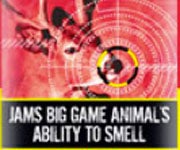 If you’ve been following along, you know that I’ve taken a few lighthearted pot shots at Nose Jammer, a spectacularly popular new vanillin-based “olfactory nerve overload system” in an aerosol spray. Well, I got a chance to test it last fall, and am finally getting around to reporting my findings.

For years, a contingent of deer hunters has trumpeted the efficacy of using vanilla extract as a cover scent. So except for making me hungry, I have no major problems with the fact that when you spray Nose Jammer in the woods, it smells like you’ve opened a box of vanilla cookies. What cracks me up, though, and what I’ve been specifically poking fun at, is the name of the product and the claim–written right on the can–that it “Jams Big Game Animal’s Ability to Smell.”

Maybe it’s just me, but I find it comically flabbergasting that a thing so almost certainly unproven and probably unprovable can be written right on the can. Right there. In bold. Which brings me to my test.

But let me first commend Nose Jammer’s maker, John Redmond (by all accounts a good guy and fine deer hunter), on this point: He obviously believes in his product. I can only assume that it was he who sent me (a proven cynic) an unmarked and unsolicited box containing two cans of Nose Jammer to try.

And I gave it a fair trial. The long and short of it is this: It seemed to confuse some deer–in some cases long enough to make them linger where they probably shouldn’t have, especially had I been using a gun instead of a bow. In other cases, the deer just bolted.

My initial two encounters reflect this. The first, at a casual walk, a small buck got straight downwind of my stand and got his nostrils full of the stuff at about 50 yards. His reaction was obvious; he stopped dead and sniffed the air for the longest time. He’d retreat and then come back to the spot to sniff some more. He eventually snorted and trotted off. About a half hour later, a doe and a fawn hit the Nose Jammer scent stream at about 70 yards. But that old nanny wasn’t fooled for a second. She instantly bounded off; blowing, with fawn in tow.

Now to me, those first two encounters alone should prove that Nose Jammer does not jam a deer’s ability to smell. So why say that it does? It may indeed be a comparatively effective cover scent. So why not say “The Most Effective Cover Scent You Can Buy”? That, too, might be impossible to prove. But unlike the current claim, it’s not so easy to disprove.