I’ve been hunting turkeys for about 30 years now, and have experienced just about every type of spring imaginable. This... 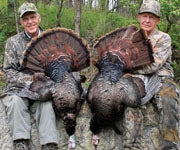 I’ve been hunting turkeys for about 30 years now, and have experienced just about every type of spring imaginable. This year (actually, our season is about 10 days old now) has some of the best hunting I’ve seen in a while, and I attribute it to strong numbers of two-year-old gobblers. Just as a healthy batch of whitetail bucks makes for an intense rut, competition between toms makes for ramped-up turkey breeding. And hunters are the main beneficiaries any time males duke it out to get to a female.

Though I haven’t pulled a trigger or loosed an arrow yet, I’ve watched four gobblers die within the last six days of hunting. The first, pictured above, fell to my friend Gabe Mierau, 12. Gabe’s dad, Dean, was called up to active military duty this winter, and before Dean left, he asked if I’d take Gabe turkey hunting in the spring. I was more than happy to oblige, and was particularly thrilled when three longbeards marched to our decoys opening morning. Gabe performed like a veteran hunter, waiting until the trio of birds separated enough to take (and make) a 10-yard shot.

Just two days ago, I joined my father and uncle for our annual spring safari. After a slow opening day, we went to a new farm to start the second morning. At 8:00 a.m., Uncle Al (on the right in this photo) dropped this big-framed two-year-old as it poked its head into a corner of the field where I was running my calls. We celebrated briefly, and then headed toward the opposite end of the property to blind call for a while. It was easy to pass an hour on the pretty, hardwood ridge — even better when a distant pair of gobblers greeted a series of yelps. Dad completed the day’s double play when a pair of gobblers strutted in 10 minutes later. The duo covered 600 yards; crossing a field, a barbed wire fence, and a steep ditch to reach us.

Like I said before, competition among birds makes for happy hunters. As a side note, my father is 82 and my uncle is 80. I hope I’m still at it when I’m their age!

So how’s the turkey hunting in your neck of the woods this spring?