The first Minnesota timber wolf killed during a regulated hunting season may fall to a deer hunter. According to this... 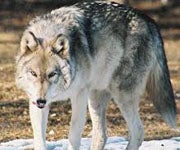 The first Minnesota timber wolf killed during a regulated hunting season may fall to a deer hunter. According to this story in the Brainerd Dispatch, the DNR is taking public comment on a proposed two-part wolf season, with the first hunt coinciding with the deer opener on Nov. 3. The second season–which will include both hunting and trapping–will take reopen in late November and close in mid-January, unless a quota of 400 wolves is reached earlier.

This fall’s wolf season will be the first in Minnesota’s history. Prior to 1974, when timber wolves were placed on the endangered species list, wolves were an unprotected species. Unlike the other Great Lakes and western states, wolves were never extirpated from Minnesota, and current estimates place the population at around 3,000 animals. Federal damage control trappers have consistently removed an average of 170 wolves annually.

The DNR’s proposed season–which it calls “very conservative”–calls for 6,000 licenses split between the two hunts. Both residents and nonresidents are eligible to apply for a hunting tag, with proposed fees at $30 and $250, respectively. Nonresident hunting licenses will be limited to 5 percent of the total, or 300 tags. Only residents will be allowed to trap or snare wolves during the second season.

I view this hunt as a huge and important milestone for midwestern wolf management, as well as Minnesota sportsmen and residents. I’ve always been a little confounded that our state has not been allowed to manage a wolf population that has been thriving for many years, and I’ve talked to federal trappers who’ve noted that they’ve removed (read “euthanized”) as many as 200 wolves in a single season here.

This is a waste of an incredible resource, and the fact that Minnesota hunters and trappers can now help regulate the harvest of this fantastic predator finally puts things right. Hopefully, Wisconsin and Michigan (where reintroduced wolves are also thriving) will follow the Minnesota DNR’s lead and model a season that will allow sportsman a chance to harvest surplus animals and, perhaps more importantly, give farmers at least some buy-in to managing wolf numbers. Finally, the return of wolf management to these states can hopefully serve as an example that the Endangered Species Act has its success stories, too.