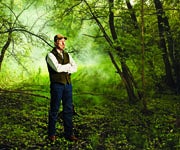 Wisconsin’s new Deer Czar–Dr. James Kroll–and his team have issued their much-anticipated review of Wisconsin’s whitetail management. We’ve covered the precedent-setting move by Governor Scott Walker of hiring a politically-appointed deer trustee in the magazine and in this space but that story appeared before Kroll and his team had finalized their work.

Now we have the final report, and several of the recommendations make good sense, and I felt the team was largely fair in its critique of the Badger State’s deer program, pointing out shortcomings and offering suggestions for improvement. The seven-page summary can be read here but the highlights for me were:
– Do away with population goals and estimates at the DMU (deer management-unit) level…And replace it with a simplified goal statement of increase, stabilize or decrease population density.
– Establish a Deer Management Assistance Program (DMAP), which will put biologists on the ground with private landowners to help them with management on their properties.
– Consider a more passive approach to CWD management, with an emphasis on detecting disease spread, responding to breakouts and involving citizens.
– Involve the public more in data collection, management and input, give the Conservation Congress a more active role in decisions at the local level.
– Improve habitat assessment and range evaluation, especially on public lands, and form a Young Forest Initiative Task Force (this is, in my opinion, especially critical on national forests in the state).
– Continue research on predator populations and their effect on deer herds.

Hunters concerned about comments made by Kroll in a decade-old interview with Texas Monthly magazine will be interested to know that nowhere in his report was there mention of further privatization of whitetail deer or deer hunting. Indeed, many critical public lands issues were discussed. Overall, Kroll and his team pointed out the strained relationship between the Wisconsin DNR and state deer hunters and offered some concrete suggestions for improving that marriage. Now, as the old saying goes, the devil will be in the details. Assuming Governor Walker has buy-in for Kroll’s ideas, implementing–and paying for–them will be the challenge.