I say surprising not because the new Heli-M is a pleasure to shoot–that, I expect from Mathews’ top-end bow–but because... 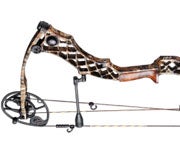 I say surprising not because the new Heli-M is a pleasure to shoot–that, I expect from Mathews’ top-end bow–but because I did not expect such a short, light bow to shoot as well as it did.

But first, after reading the review I posted here last month of the new Bowtech CPX and CPXL, in which I described the bow’s performance and listed my shooting results at 30, 40, 50, and 60 yards, a reader asked: “But do you like it?” It’s true, I never really addressed that. So, the answer is: Yeah, sure. Quiet, smooth, fast, well-built–what’s not to like? The CPX’s draw cycle is a little more aggressive than what I prefer for hunting, and because a longer bow doesn’t typically present a problem for me in the field, I like the smoother-drawing CPXL a little better, which shot exceedingly well all the way out to 60 yards. But that’s just me. You might have no trouble with the CPX’s draw and might love the blazing 355-IBO speed.

In the end, I’m happy to tell you what I like, but more important, I think, is for me to describe the bow’s characteristics and performance and let you decide if that fits what you like.

And now back to the Mathew’s Heli-M. Let me begin by saying, I like this bow. (There.) It was a pleasant surprise. I’ve said a number of times here that I’m leery of the short-and-light craze because, as a rule, longer, heavier bows shoot better. I’ve also said that there are exceptions to that rule–and the Heli-M is a notable one.

At just 30-inches long and 3.5 pounds, it is plenty short and light enough to make me skeptical about the prospects of holding it steadily on target. But when I shot the bow, I found that whatever instability may be inherent in its wispiness is nearly cancelled out by how well it balances and how naturally it points. (Interestingly, I shot it better without a stabilizer.)

Typical of any Mathews’ single cam, this one is very smooth. The price you pay for the joy of drawing the Heli-M is a little less speed: At 332 fps IBO, it’s not slow by any means, but not blazingly fast either. It’s quiet and pleasant to shoot, although I did notice a tiny bit of jump at the shot–no big deal. Most impressive is how well it shot inside 40 yards. As usual, I shot 10 three-shot groups at 30, 40, 50, and 60 yards, and then averaged the group sizes. Here are the results:

I actually averaged a little over 2.8 inches at 40 with my first 10 groups. But figuring that this had to be an aberration–that I must have just shot a little out of my mind for that round–I did it again the next day. And I shot little over 2.7 inches. The number above is the average of both sessions. The groups at 50 and 60 are not bad either, but these groups tended to be inconsistent, with some real fliers.

In end, this very short, very light bow shot surprisingly well inside 40. And, again, it comes down to what you like. If you like a short, handy bow; if you do not need blazing speed; and if you are not apt to shoot beyond 40, I don’t think you’ll find a better choice than the Heli-M.