Well done, all. Lot’s of good captions. Hurteau and I were largely in agreement over the finalists, though I had... 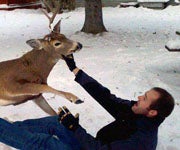 Well done, all. Lot’s of good captions. Hurteau and I were largely in agreement over the finalists, though I had to make an executive decision on the winner. Never, I’ve learned, let Dave make critical decisions after one of his Monday morning rants (see this blog from August 20); he just gets a little testy after taking on whatever aspect of modern deer hunting has turned his crank that day.

Anyway, without further fuss, and in no particular order, here are the 10 runners-up:

—Extreme shed antler hunting….packages starting at only insanely low prices. -bruisedsausage
—“I really need to get a dog!” -scampman85
—Judo gold medalist Buck virginianus disqualified after investigations into the fact that he is a deer. -Brent Starr
—“…No! I said your momma’s a DOE!!…” -csoutdoors
—Every PETA members fantasy. -penshockeyfan
—PSA: Do not apply estrus to your clothes or boots. -mdsulli2
—“What did I tell you about trail cams in the bedding area?” -tlchunt72499
—“If you’re going to name me, at least make it something original!” -jasona
—“O.K!..O.K!… No more snow angels OVER your scrapes! I get it!… I get it.” -Amelia Pirtle Solley
–S_tevens Spielberg’s Ungulate Park_ -Josh Giannino

And our winner, who takes home a slick package of HS Scent-A-Way Products, is FlyBorchetti, with:
—After watching an episode of Hillybilly Handfishin’, Billy thought he’d give it a try during buck season.

Congrats, FlyBorchetti; we’ll be contacting you soon so you can receive your prize!