As far as the new season goes, most of us still have some floor pacing to do–but not anyone who... 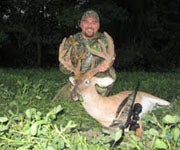 As far as the new season goes, most of us still have some floor pacing to do–but not anyone who lives in South Carolina, which hosts the country’s earliest opener. Perhaps nowhere in America does a hunter stand a better chance at taking a velvet buck, and certainly no place offers such an early chance for the rifleman.

My friend Jason Hart, an account manager with Mossy Oak, took a fantastic velvet 10-point last Wednesday afternoon, the state’s opening day. Jason’s work load had prevented him from doing much preseason scouting, but one of the veteran members of his hunt club pointed him to a stand overlooking a peanut field.

“He’d seen some nice bucks working that field and was kind enough to point me to that spot,” Jason says. “About 7:40 in the evening a pretty, 120-inch 10-point fed into the field. I was glassing him when an even bigger buck, walked out behind him. It took me a good minute to get my breathing under control and stop shaking, but when I finally calmed down I made the 240-yard shot on the bigger buck. This is my best South Carolina buck and my first velvet buck ever. I grew up in this state but left to go to school and start my career. I’ve finally come back again, and this was a wonderful homecoming present!”

And I thought I was already anxious for my home-state opener!