Show Me Your Deer-Gun Wish List (Or Why I Love GunBroker.com, Part 2)

When I posted earlier this week that GunBroker.com (GB) is a great place to find project guns, like my Savage... 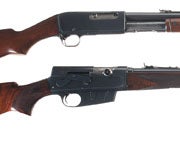 When I posted earlier this week that GunBroker.com (GB) is a great place to find project guns, like my Savage Model 24 .22LR/.410, some of you pointed out that it’s also useful for gauging the current value of guns and for adding guns to your wish list. Right on. That’s just where I was going with this. So one at a time:

Gauging Value
There are two classic North-Woods deer rifles I’ve always wanted: a Remington Model 14/141 (the company’s original centerfire pump and precursor to the 760/7600 ubiquitous to today’s Adirondack deer camps; shown at top above), and the Remington Model 8 (the company’s original autoloader, designed by Browning, and just one crazy-cool gun; shown at bottom). Now I own both. I won an auction on GB for the 141 and got it at a good price. I bought the Model 8 at my local gun shop but I still credit GB. By keeping track of what Model 8s were going for on the site, I knew enough to scoop up the one I found locally, in great shape, for just $390. I didn’t even bother trying to talk them down.

Adding to the Wish List
Funny you should bring this up, Buckshottoo, because I just started such a list based on perusing GB. Here are my top three lusted-after deer guns:
1 – Mannlicher-Schoenauer, preferably in 6.5 or 7×57
This will stay on the wish list for a long, long time–unless you all decide to take up a collection for me.
2 – Marlin Model 1893 in .30/30
Every bit as cool as an old Winchester 94–which I already have–and a better gun in some ways; of course, I can’t really afford this one, either.
3 – Winchester Model 70 Pre-64
What can I tell you? I don’t have one and I should.

So now for the big question: What are your top three GB-Wish List deer guns? And don’t let the fact that we’ll all soon be bidding on the same guns deter you. This will be fun, and there are plenty to go around on GB.