World Record Buck: This Could Be the Largest Non-Typical Ever Shot By a Hunter

Boone and Crockett officials confirmed today that they’ve received a score sheet from an Indiana buck that could threaten the... 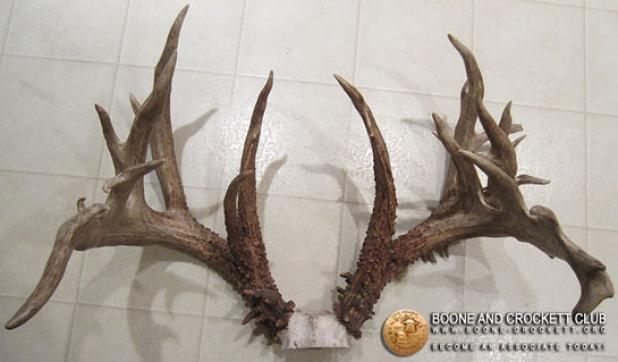 Boone and Crockett officials confirmed today that they’ve received a score sheet from an Indiana buck that could threaten the mark for the largest hunter-killed non-typical whitetail of all time. The buck, shot on Nov. 17, 2012, in Huntington County, Ind, is rumored to have scored 309-7/8 inches. Currently, the largest nontypical whitetail shot by a hunter was killed by Tony Lovstuen near Albia, Iowa, in 2007. That buck scored 307-5/8 inches. B&C also recognizes found or “picked up” heads; the world record is an Ohio buck that measured 333-7/8 inches.

Though B&C has received a score sheet from a veteran, official measurer, they’re waiting to view pictures and a video tape of the rack to confirm the buck was scored properly. Measuring a non-typical, particularly one of this size and caliber, can be a complicated process. B&C officials would review the tape before affirming the scoring process was correct, and the buck would still have to be panel-scored before an official proclamation was made.

Regardless of the buck’s final B&C standings, this is one humongous whitetail. Illinois measurer Tim Walmsley first made me aware of this buck, and the stats he posted on his blog at Heartland Outdoors are ginormous. I talked to the folks at B&C this morning, and while they don’t want to discuss many specific measurements, they did confirm that the buck has 13-inch brow tines, and the gross nontypical score is 319 inches.

Of course it’s important to be cautious here. If the recently-concluded King Buck Saga taught us anything, it’s that one measurer’s interpretation of the scoring manual isn’t necessarily correct. And scoring the King buck was a veritable walk in the park compared to putting a tape to a massive non-typical rack like this one. That said, B&C is taking a long, hard look at this Hoosier State giant. Stay tuned to Whitetail 365 for updates on this incredible buck.