Is This the Best Shed Season Ever?

Last week, my hunting buddy Alan and I spotted the antler pictured above. It appears have come from 3-1/2 year... 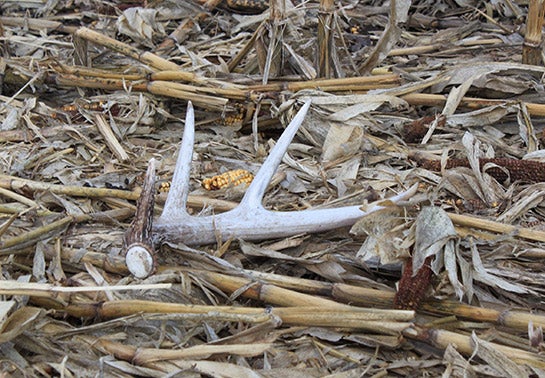 Last week, my hunting buddy Alan and I spotted the antler pictured above. It appears have come from 3-1/2 year old deer that I have trail-cam pictures of but never saw in person. This one side measures roughly 55 inches, putting the buck in the mid-120s last fall. Not a giant, but not bad either. More to point, it’s one of many decent sheds we’ve found this spring and helps support a claim I’ve been hearing a lot lately–that 2014 has been one of the best shed hunting seasons in recent memory.

Which begs the question: Why?

In my opinion, several factors have to align for primo shed hunting, and we’ve had all of them in the upper Midwest this winter and spring:

Cold weather that starts in late November or early December gets deer serious about feeding immediately after of the rut. If the weather stays mild, bucks may remain isolated, feeding on a variety of foods within their core areas. But when winter hits early and hard, bucks head straight for the best grub and will often stay there through the antler drop.

Snow is important for the same reason as above. It also prevents deer from wandering far and wide to locate other prime food sources. And, of course, where bucks wind up concentrated, so do shed antlers.

Deep snow also keeps shed hunters from starting early and covering lots of ground. I wouldn’t have even considered this factor a few years back, but with the increasing popularity of shed hunting (and the unhappy rise in shed “poaching”) collecting antlers has become a competitive event. In a relatively snowless winter, shed hunters start early and walk farther. This winter kept them indoors longer.

I’m not exactly finding sheds by the tubful. Never have around here. But, I am having an unusually good spring, and so are most of my friends and industry sources. So, how about you? Are you having a stand-out shed season, too?