Two Final Fours in one weekend. What more do you want? And ours is a contest of mostly classics, including... 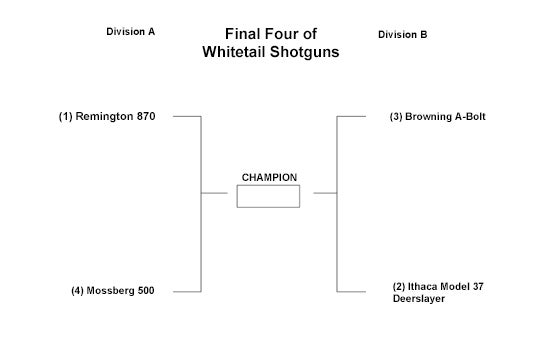 Two Final Fours in one weekend. What more do you want? And ours is a contest of mostly classics, including the Remington 870, the Mossberg 500, and the Ithaca Model 37 Deerslayer. It was, in fact, nearly a contest of all classics, as the 8-seed Browning Auto 5 was outpacing it’s superior A-Bolt sibling until the final minutes, when a late run put the latter on top at the buzzer.
And so, we are ready for tip-off–and mercifully done with sports analogies until next week. Here’s the updated bracket and Bourjaily’s original seeding. Scroll down to vote.