Spring Scouting: The Search for One Killer Spot

It’s finally spring, and I’ve been walking some of my hunting properties in earnest. As Hurteau and I have pointed... 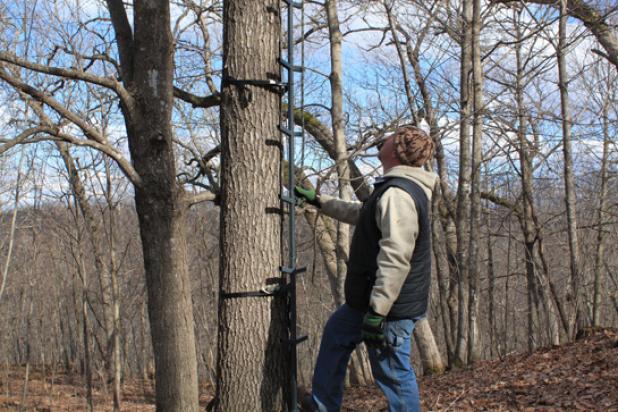 It’s finally spring, and I’ve been walking some of my hunting properties in earnest. As Hurteau and I have pointed out previously in this space, if you really want to know your deer ground, now — in the narrow window separating snow-melt from green-up — is the time to be out there.

Spring scouting has been my annual ritual for years, but most of that recon has focused simply on getting a better overview of a property and how deer use it. Lately, I’ve added a new, more specific, mission: finding, then setting up, one killer stand location for next fall’s rut. To be even more specific, I want that stand to be in or near a bedding area or other spot that’s difficult to set up during the season.

Here’s an example: Last spring I hung “The Ski Lift” stand. It earned its nickname because it sits on the edge of a cedar-lined bedding point on the peak of a hill so steep it would be nice to have a chair lift to reach it. The point had just enough rubs to grab my attention, but what really caught my eye were the terrain features; it seemed every wrinkle in the landscape funneled deer right toward that point.

So, after some head-scratching, I found an elm tree that grew within a bow shot of the main trails. A few weeks later, my dad and I crawled back up that hill with a stand, climbing sticks, a safety line, and saws to cut shooting lanes. We hung and brushed the set, then cut and marked an entry trail all the way back down the hill. The process ate up the better part of an afternoon.

But here’s the thing: The Ski Lift was one of my hottest stands last fall. In two hunts I saw 9 different bucks, and all but one walked within bow range. I was able to sneak into that spot almost noiselessly, thanks to our walking trail. And since I waited for the right wind, not a single deer busted me. I know if I’d tried to hang the set during the fall, I’d have wasted an afternoon of hunting and probably disturbed deer patterns.

So in the weeks ahead, I’m looking for another spot like The Ski Lift; one I know will be great during the rut, but will take some time and sweat to prepare. Come November, I know it’ll be worth the effort.