When Marc Anthony shot what appeared to be 190-class buck with his bow in the fall of 2010, he caught... 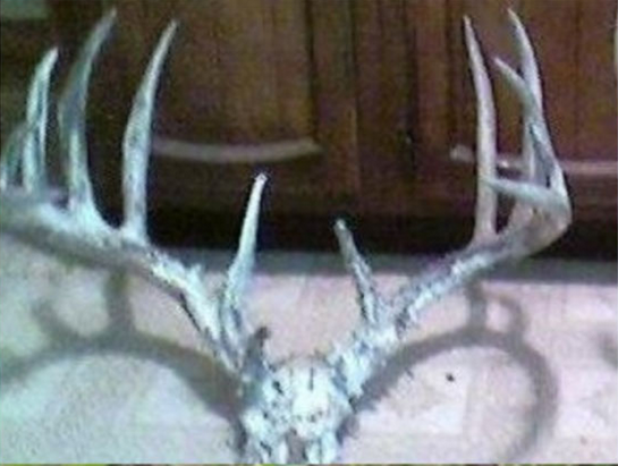 When Marc Anthony shot what appeared to be 190-class buck with his bow in the fall of 2010, he caught a lot of people’s attention. Anthony, who hunts from the ground with a ghillie suit, had already killed a pair of net Boone & Crockett bucks using this method, so tagging Booner No. 3 was pretty heady stuff. His star was shooting upward. He landed sponsorships from deer-industry biggies (including Bear Archery), put his name on a gillie suit (sold by Bush Rag), and had become a popular seminar speaker at hunting shows.

But now there seems to be a problem with that 2010 bow kill. Since these photos hit Facebook, then archerytalk.com, and then Heartland Outdoors last week, Anthony stands accused of faking this trophy. The top photo shows the rack of a found Kansas buck, which Anthony allegedly purchased. The bottom is field photo of the buck he claimed to kill in 2010. And the apparent similarity of the racks has the Internet pulsing with accusations that Anthony used his considerable taxidermy skills to put the Kansas rack on an Illinois bow-killed buck. At the 2011 Illinois Deer Expo’s contest, he entered the 190-class giant and won top honors in the Archery-Typical category.

Anthony has not returned my calls, but in a recent interview claims he has “done nothing illegal.” While that remains to be seen, what he didn’t claim may be more telling. As far as I can tell, he didn’t, for example, insist that the buck is legit. Nor did he swear his innocence. Exactly what Anthony did do remains unproven, but what seems more and more clear is that he is now done in the deer-hunting world. And if he did indeed work so hard to deceive so many, that is what he deserves, at a minimum.

I know Marc Anthony. Both Hurteau and I have interviewed him, and he comes across as a smart hunter, a straight shooter, and a very nice guy. There was no reason to suspect him–other than his astounding success. Which gets to the very heart of the issue: I really, truly hate to admit this, but we seem to have entered a new and disturbing era of deer hunting in which high-profile success almost has to be viewed with some level of skepticism. Which is a sad state of affairs.

Accusations of poaching and cheating have always dogged highly successful deer hunters, but until recently the proven poachers and cheaters have been few and far between. So I have always done my best to ignore the negative buzz surrounding many whitetail stars, feeling that an innocent-until-proven-guilty stance was important to maintain. But the Anthony issue is just the latest in a recent rash of cases that are chipping away at my resolve. Hurteau and I were chatting about this today and without even thinking hard we named six or seven high-profile busts in the last handful of seasons (two involving television personalities, another a state record bow-killed buck).

I’ll never really be able to get into the head of someone willing to cheat in order to be known as a killer of giant whitetails. What I do know is that the damage they do to all of us is really getting tiresome. It’s entirely possible to chase big, mature, deer (and, yes, even consistently tag them) without losing your soul. So it’s sad that we’ve come to a place where even a relative Pollyanna (me) begins looking at any new, rising star with a hint of built-in skepticism. But there it is–a disturbing commentary on modern whitetail hunting.