I’ve been traveling a lot lately, and it’s been a month since I spent a weekend at home. So this... 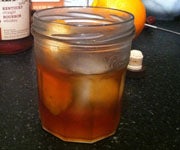 I’ve been traveling a lot lately, and it’s been a month since I spent a weekend at home. So this past weekend, with nowhere to go, I took it easy. I slept in. I watched football. And I had fun in the kitchen experimenting with new recipes. I cooked a venison curry that I’ve never tried before (more on that to come later this week), and I also infused a bottle of bourbon–with bacon fat.

The bacon-bourbon was not my idea. Earlier this year, one of my best friends was here in New York City for business and we met up for drinks. One of the bars we visited, an out-of-the-way joint called PDT, listed a “Benton’s Old Fashioned” on its cocktail menu. Unlike a traditional Old Fashioned, this drink called for maple syrup instead of sugar and was made with–you guessed it–bacon-infused bourbon. We both ordered one and really enjoyed it. It’s not an everyday, or even every weekend, kind of drink–but still, pretty good. Since that night I’ve been looking for an opportunity and excuse the make the cocktail at home. So this weekend, with nothing to do and an unopened bottle of Wild Turkey 101, I decided to experiment.

Now I know what some of you are probably thinking: Bourbon is perfect just the way it is. Why mess with it? And you’re correct. Sort of.

Look, I love bourbon–more than any libation. I love sips of Pappy with a thick book in a comfortable chair, and I love swigs of Old Charter between laughs around a campfire. I celebrated with bourbon the night after I shot my first deer, and at camp after I landed my first steelhead. I love bourbon neat, on ice, or mixed into a Manhattan or Sazerac. (I don’t love it, however, with Coke. That just spoils the spirit.) And I love it most of all in an Old Fashioned–the most essential cocktail. Anyway, my point is: I love bourbon just the way it is, too. But sometimes it’s fun to experiment with new flavors in the kitchen. Just so you know, this bacon stuff tastes really good. But then, how could it not? It’s bourbon and bacon!

Click here for a step-by-step photo gallery on how to make bacon-infused bourbon–and the Benton’s Old Fashioned.