Spackle Spaghetti and Meatballs vs. Venison Sloppy Joe Looking back on the short history of Food Fight Friday, something seems... 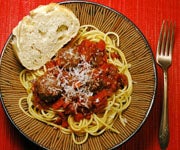 Looking back on the short history of Food Fight Friday, something seems to be missing–or at least be in short supply. We seem to have gotten caught up in some of the finer things you can put on a plate, while giving America’s meat short shrift. I would wager that at least 75 percent of what venison hunters eat comes in the form of ground meat: burgers, chili, tacos, or as we have here, meatballs, which I’ve put against a Sloppy Joe from Field & Stream‘s video editor, Michael Shea.
**
David’s Carl Spackle Spaghetti and Meatballs**

I don’t know about you, but every time I hear the word meatballs, I think of Bill Murray’s turn as camp counselor Tripper in the classic 1979 summer camp movie Meatballs. It’s a short jump from there to his defining role as Carl Spackler in Caddyshack. So, whenever I make up a batch of venison meatballs, I automatically fall into my best (though still not very good) impersonation of the “greenskeeper turned Masters champion” and run through every Caddyshack quote I can remember as I’m mixing and rolling. “So I got that goin’ for me, which is nice.”

There was a time in my life when a Sloppy Joe was the only thing I knew how to cook. That’s changed some, but I still find myself going back to this college staple, especially at the end of a long day when the last thing I want to do is cook. Put a little oil in the pan, brown the venison hamburger, add ketchup or, in this case, barbeque sauce. Here I used Sweet Baby Ray’s, which is pretty good and, oddly, in stock at my neighborhood bodega. While the meat was cooking, I boiled down some leftover holiday cranberries with a splash of orange juice, brown sugar and a healthy dumping of sugar. I topped the Sloppy Joe with shredded gruyere. It was fast. It was easy. It was delicious.

If you think you’ve got the chops to take on a Carl Spackler hybrid-cross or another delicious-looking fish or wild game dish, send your best food photo to fswildchef@gmail.com.